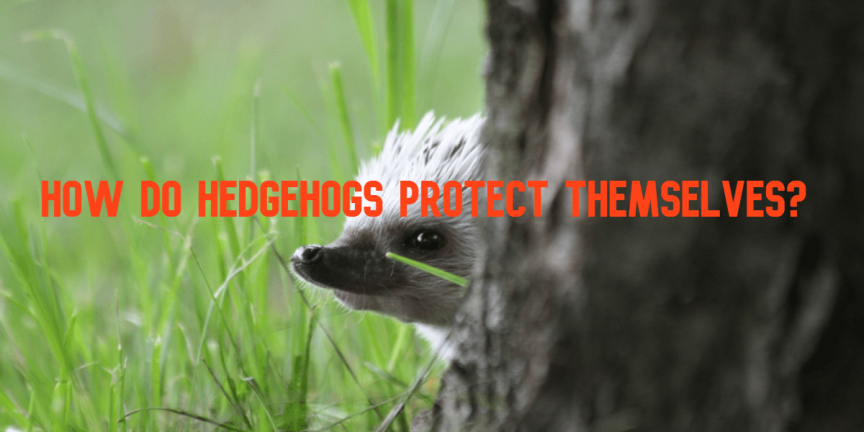 Hedgehogs are small animals, which makes them vulnerable prey for various predators. All the animals in nature have evolved to have some sort of protective mechanism. The wilderness is a cruel place. Without proper defense, both smaller and bigger animals may end up as victims. In this article, you’ll learn about different ways how hedgehogs protect themselves. It’s especially useful to know for hedgehog owners. The need to protect themselves explains quite a few quirks these prickly creatures have.

Quick answer: how do hedgehogs protect themselves?

Hedgehogs have mainly three things in their defense arsenal:

Usually, the two latter behaviors occur at the same time.

What are the ways hedgehogs protect themselves?

As they have undergone evolution, hedgehogs have adapted a few approaches for self-protection. Since hedgehogs are first and foremost wild animals, you could see the same behaviors in your domestic hedgie as well.

In the following paragraphs, we’ll look at each of these protective mechanisms more in-depth.

What’s the most iconic behavioral trait of hedgehogs? There’s no doubt that it’s rolling into a ball. Even people who aren’t familiar with hedgehogs are likely to recognize this reaction.

Hedgehogs use their back muscles to lay out all their spines. As this pose is different from their regular posture, every single quill acquires a sharper character. At the same time, their abdomen and face are protected as well. This is because the weak spots are hidden when they curl up into a ball.

Since the muscles pull on quills in opposite directions, a dangerous formation for predators occurs. Since all their weak spots are hidden, attackers aren’t left with much to work with. Most predatory animals would move away to find an easier target.

Fleeing is the most natural reaction for hedgehogs. Usually, they try to run away before rolling into a ball. It’s the easiest way to remove themselves from a situation that has the potential to become dangerous.

Hedgehogs can be surprisingly fast. Naturally, if you compare them to cheetahs or some other fast animals, they would feel very slow. But, when you account for their tiny legs and awkward body type, hedgies are quite fast in the light of their physical makeup.

Normally, hedgehogs don’t bite for protecting themselves. They do bite a lot to discover new tastes and aromas. It’s a very natural way for them to explore the surroundings and experiment with various objects found in it.

However, biting still deserves a spot on this list. There are situations where hedgehogs could use biting for protection. For example, there is a video online that shows a hedgehog fighting a snake. The only way for the hedgehog to survive is by biting the lunging snake in a strategic spot near its neck.

This is a very controversial topic. Namely, a lot of debate surrounds the behavior called self-anointing. Some scientists and biologists believe it’s a part of hedgehogs’ protective mechanism.

The process of self-anointing is simple, yet strange for the human bystanders. Hedgehogs start to spread a frothy mixture from their mouths on their quills. Some fresh owners get even scared because they think it’s a medical emergency.

Obviously, there are many theories around. The protective mechanism part focuses on their potential to use a strange scent to confuse any predators lurking around. Some scientists have even gone as far as saying that hedgehogs use poisonous substances to spread on the quills.

Hedgehogs make some noise all the time. Often, when they are scavenging for food in the wild, they make grunting noises. This is just part of their innate character.

On the other hand, hissing is a very distinct sound. Hedgehogs start hissing when they face a potential enemy. While curling up into a ball, they tend to make a hissing noise at the same time. Also, they could produce a vibration that should scare the predators away.

I’m not a predator. But my hedgie acts exactly like this!

Hedgehog owners recognize many behaviors in their hedgehogs that are originally protective mechanisms. Sometimes it’s confusing. Especially so, when a new hedgehog owner handles his pet.

In reality, you shouldn’t feel that you are somehow hurting your hedgehog. Unless you actually do anything highly uncomfortable for them. In any other case, it’s completely normal that your hedgie acts this way.

Remember, they are wild animals after all. Pet hedgehogs have still the same instincts deep down. When they feel scared, a defense mechanism kicks in. They start to protect themselves from an imaginary threat.

As you progress in your relationship with your hedgehog, things will get better. You just have to give this enough time. When everything goes well, they start to recognize your smell. Rolling into a ball or hissing will start to happen less frequently.

My hedgehog never assumes a defensive position. Is it OK?

Yes, it’s completely fine. Sometimes owners start to worry about the opposite. Their hedgehog isn’t rolling into a ball nor hissing that much. Then the owners think that maybe something is wrong with their hedgie.

However, it’s likely nothing to worry about. Actually, this means that your hedgehog feels safe. Owners who treat their hedgehog with kindness and respect their boundaries will see that hedgehogs aren’t that scared all the time.

Still, if your hedgehog acts really strange, then it’s better to be safe than sorry. For example, let’s say that they curled up into a ball all the time. Suddenly, they become completely apathetic to everything. In this case, it’s definitely time to pay a visit to the veterinarian.

From whom do hedgehogs need protection?

Hedgehogs have many enemies in the wild. They make easy prey because of their small size. However, the quills and the reaction of curling up serve them well. The typical enemies of hedgehogs include:

These are just a tiny part of the potential predators. Keep in mind that the particular enemies depend on the region. Hedgehogs inhabit many regions of the world that have wildly different flora and fauna.

What animals need protection from hedgehogs?

Hedgehogs aren’t eating only berries and any other plant material that they find. Since hedgehogs are opportunistic eaters, they eat a variety of living things besides plants. Here are some of the typical foods that hedgehogs ‘prey’ on:

The bottom line: how do hedgehogs protect themselves?

Hedgehogs could be easy prey if it weren’t for their protective mechanisms. Wild hedgehogs have many ways to deal with potential predators.

The most typical reaction is fleeing. When danger comes their way, they just run to the hills. However, sometimes it’s too late to run. In this case, hedgehogs start hissing and curl into a ball.

In extremely rare cases, hedgehogs might bite as a form of self-defense. It’s very rare because this means they haven’t rolled into a ball. An unclear way of protection is self-anointing. Still, scientists debate over the reasons for this behavior.