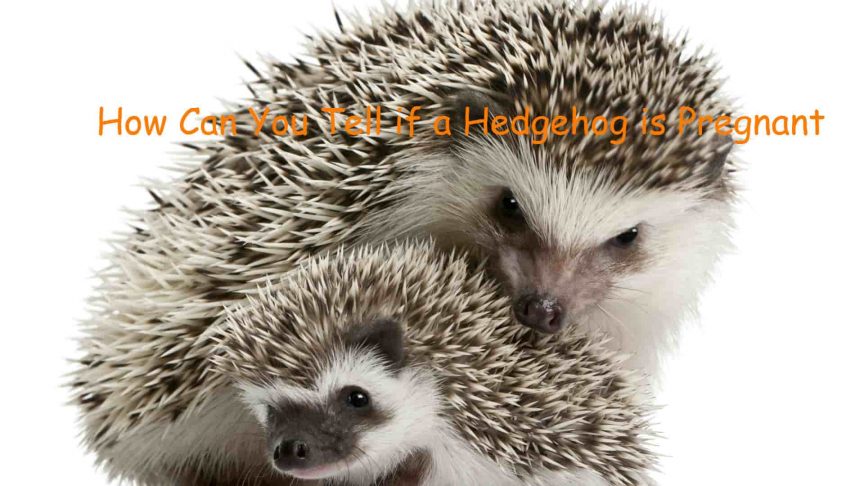 Hedgehogs breeding can be both the most beautifully rewarding and also the most saddening thing that you could do.
There are really very few things that you can do that will have such a profound effect on you with its near unpredictability and gut-wrenching possibilities.

Watching baby hedgehog of any sort come to life can be a beautiful experience. But to be honest, this endeavor of breeding hedgehogs is one of the most frustrating ones you will embark upon.
And yes, while it will break your heart a lot, you will also have some really beautiful hoglets victories. There is a question however that hangs in the air.

A question that has baffled a lot of breeders, even the experienced ones, is the question of how one would know if their hedgehog was pregnant. While trying to figure out if your hedgehog is pregnant, the few things to look out for are: is she old enough? Did you mate her? Is she eating more? Is she getting fatter? Are her nipples bigger? Smelly pee.

This article aims at explaining these factors and some more. Read on…

Is She Old Enough?

Hedgehogs usually become sexually mature at around five months old. If she is hanging around male hedgehog earlier than this, it might be dangerous for her even if she does mate and gets pregnant. So in the first place, you should not even be trying to make her mate anything earlier than five to six months of age.

Did You Mate Her?

Contrary to popular opinion, Hedgehogs do have a ‘heat,’ or estrus cycle. They are not strictly or totally induced ion. This cycle though is difficult to catch as it happens every her week with nine days on, seven days off routine. Even though this is not absolute, it is definitely worth noting.

In order to catch the cycle, breeders often just put the male and female together for about four-five days and then separate them for four days. Then they repeat the process. The suggested duration of separation and joining varies from breeder to breeder. But on average, most breeders agree that the hedgehog has ovulation between seven and ten days. After this period, they need to be separated for a rest period. Generally, experience and the continuous attempt will be the guide in having successful natural insemination for your hedgehog lady.

Errors will surely occur such as the male and female fighting and injuring each other. Or miscalculations … but generally, you should learn pretty fast. So when you wonder if your hedgehog is pregnant, the first question you should ask yourself is if you have been trying to make her pregnant. And if that effort you have been making is accurate enough to have yielded.

Now that you have ascertained that you had the Lady and Sir Hedgehogs together for a while that was at least nine days long. Have you noticed that she has been eating rather faster than she usually would? Does it seem like she’s clearing her plate of food on a flash and then looking for more… no begging for more? Had your little lady hedgehog suddenly lost all of her manners and is now eating like a classless little vixen? If your answer to this is yes, then indeed she might be pregnant.

Unlike humans or any other bigger animal… hedgehogs have a gestation duration of about thirty-five days and thus things seem to happen a little faster for them. By day three to five of gestation, you should notice a significant rise in appetite and demand for food. At first, it could strike you as just a phase of the munchies but it is expected to get worse and become full-blown gluttony within an alarmingly short period of time.

Is She Getting Fatter?

Is your female hedgehog fat? It seems like an innocent enough question. It is true that hedgehogs have a tendency to put in weight over time when they get steady access to food. Also, just like humans, it is totally normal if some hedgehogs see. To be so much bigger than all their siblings and cousins. This difference in stature is not necessarily an indication of pregnancy except of course if she has met all the above conditions. Now just like humans, and any other animals really, hedgehogs also display different symptoms in early pregnancy.

While some hedgehogs will show a stark and sharp difference in size and weight between pre-pregnancy and delivery. Others might only slightly put on weight and you might have to check their weight every day to see those slight movements of the arrow. So again, it is tricky, but when added to the other symptoms listed above, it is indeed starting to seem like this lady hedgehog might be carrying.

Touch the Tummy, Feel the Hoglets

Next, if you are still pretty unsure about the situation of things with the lady hedgehog. You can pick her up as gently as you possibly can and touch her tummy. What you are supposed to do here isn’t much of touching as much as “palpating”. It is advisable that you use your forefinger only or at the most, fore and middle fingers together and as gently as you can, touch the lady’s tummy gently.

If you are observant enough, you might feel a lump, a different mass that isn’t consistent with that obtains in all the other hedgehogs. This very well might be your hoglets so you have to be as careful as possible. This is best done at about twenty days after she had been with a male hedgehog. That way, the hoglets would be rather grown and less likely that the stress of the exercise would be too much for them. Don’t panic if you don’t achieve good results with this. She is fat remember? It would be more difficult to feel around her abdomen.

Another sign to watch out for is that her teats or nipples have suddenly become large and more obvious. This more obvious teats thing usually happen as a result of pregnancy hormones in her that is getting her ready for nursing. But then, she could just be a big breasted lady or her teats might be just another byproduct of her weight gain.

As she gets nearer and nearer to the due date, her cage might stink more because her pee had started to stink worse than it ever did. The odor from her urine would become very noticeably sharper and stronger.

Fixing Up for the Hoglets

Is she making piles of bedding materials, moving stuff around and just generally more interested in piling stuff up to block the entrance of her little sleeping spot. This is called nesting. And every mammal I know about do it. And even non-mammals do too. So when she starts clearing out, making things cozier and just generally fluffing up the place, she indeed might be pregnant.

The point of all the shuffling around is so that she can have a conducive place to birth her baby in. Now her idea of “conducive” might be different from other hedgehog ladies’. So the level of effort put into nesting could really be determined by a lot of things.

Towards the end of her gestation, she will very likely start to eat less. This Loss of appetite is often due to more difficulty moving around and a feeling of crowdedness in her guts. So if your lady hedgehog isn’t eating quite as well as she used to in the last few weeks. If it suddenly starts to feel like she had been in a roll and now was just not interested in food. Then it could just be that she had been pregnant.

Another thing to watch out for is the fact that this little lady might be spending so much less time playing with her toys, going on her wheels. Is she spending more time just sleeping or resting and being a total slob? If you are observing an unusually lazy attitude in little Mrs hedgehog, in addition to all the above-listed symptoms… you just might be about to be a grandparent.

Now on their own, none of these symptoms mean anything. She could just have a surge in appetite or she might just be playing around with her bedding. She might even be having good old mood swings or depression bouts and this might account for her weird behavior. It is therefore important to assess her not based on one or two or even a few of these signs that have been highlighted. Rather, put all of these symptoms together before reaching a conclusion.

In reality, however, you might still be wrong even after she has checked all the boxes. The only true evidence of pregnancy is that tiny squeak you hear coming from the bedding or the cage generally. You might not be able to see them till they’re about ten days old but they will definitely be worth every second of the ride. So to be on the safe side. Take all the precautions when your lady hedgehog starts to exhibit weird behavior that isn’t her usual default behavior. It is always better to play safe.