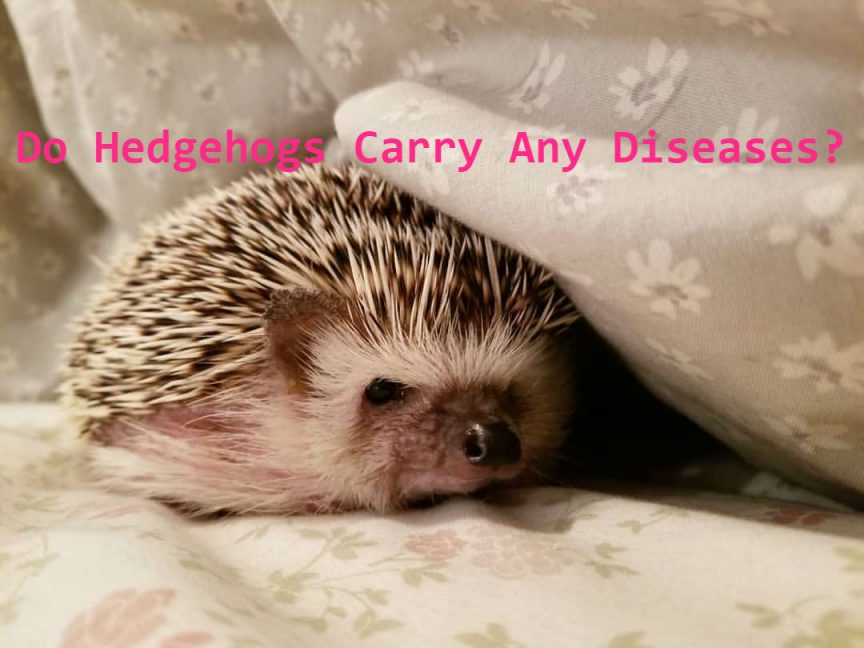 Hedgehogs kept as pets, over the years, play important roles in societies where they live throughout the world. Many households have taken them to provide social, physical and emotional development of children and the well-being of their owners, especially the elderly.
Hedgehogs are small, nocturnal insectivores that have been gaining popularity as exotic pets. As interesting has keeping hedgehogs as pets might have been, the concern is to find out if they pose any threat to humans. The threat is most notably in carrying diseases. And that is the focus of the piece.

The answer is Yes, they do. There have been several reports over the years of humans having symptoms of ‘strange’ diseases. On tracing the origin, hedgehogs are the culprits. Researches have shown that people or families that own hedgehogs are prone to those diseases. This is especially common if they have children of age 5 and below.
Arguably the deadliest of those diseases is the salmonella. Others are the contact urticaria and ringworm transmissible to humans and their domestic pets. Observation of Hedgehogs reveals that are also susceptible to several vector-borne diseases. Foot and mouth disease, and internal parasites are also common with hedgehogs which can affect other animals or humans.

Can humans get infected?

Several diseases that hedgehogs carry can be contracted by humans, either directly or indirectly. Pets owners are the most susceptible. They tend to carry the animals with their bare hands, kiss and caress the animals and touch their bedding.
The issue is hedgehogs do not show symptoms sometimes when they have an infection. Hence it is difficult to detect when they are sick leading to easy transmission to humans. Needless to mention that pets’ owners, pet shopkeepers and others that work around hedgehog should be careful.

Who are more susceptible to hedgehogs diseases?

Although all humans are susceptible to the diseases and threats that hedgehogs carry, it is more prone in children. And that is because their internal organs and immune system are still in their formative years. Thus, ensure children age 5 and below do not go near hedgehogs or have any contact with their materials.
In fact, it is advisable that if you have children under the age of 5, you shouldn’t take in hedgehogs are pets. That will help you eliminate any case of your children and wards getting infected due to the presence of your little pet.
Adults that are way over 65 years are also susceptible to these diseases. That is because they are getting older. Their cells and internal organs with age, cannot function as they used to when they were younger. Elderly people should be around hedgehogs and vice versa.

There are several infections and diseases that affect hedgehogs. Some can affect humans and cause ailments, while a few only causes the hedgehogs to be sick themselves. Below is a list of some of the common diseases:

Since salmonella is probably the most popular of the disease or bacteria that humans can get infected with from pets. It is reasonable to discuss it.
Salmonella is a bacterium that infects humans. Hedgehogs, interestingly, without causing any harm to the animal. Symptoms can include diarrhea, abdominal cramping, and fever within 12 hours of coming in contact with a hedgehog.

Ringworm is another disease that humans get infected with from hedgehog. Symptoms of ringworm in hedgehogs are dry, scaly skin and spine loss.
Several reports have shown that mere handling an infected hedgehog for 1 or 2 minutes can transmit the disease.

Rabies is also contractible from hedgehogs, studies have shown. It is most likely gotten from the animal salivating the hands of its holder or biting the humans. Symptoms include tingling or twitching sensation around the area of the hedgehog bite. It is sometimes accompanied by a headache, fever, loss of appetite, muscle aches and fatigue. If you notice any of these symptoms, it is advisable to visit a doctor to be sure of what the ailment is and get treatment.
It is worthy to note that the symptoms of rabies might not show until after a year of getting infected, and it can show after only a few days. No one can tell when exactly when the symptoms will occur.

Hedgehogs have 44 tiny teeth, and they can have almost the same infections that human’s teeth have. Infections like gingivitis, fractured teeth, abscessed teeth, and tartar accumulation are only a few of the infection that can arise.
It is advisable to clean your pet’s teeth with water regularly. However, that can be a hard task to do as hedgehogs oppose any distraction including you – the owner. So, if cleaning the mouth is not possible or difficult, you may have to take your pet to a veterinary for dental cleaning once or twice in its lifetime.
That will enable you to ensure that your hedgehog is free of any dental issue. When your pet is having an issue with its teeth, it won’t be able to crunch meal and eat properly. The loss in weight resulting from lack of eating will be the first of its problem.

Your hedgehog can suffer from urinary tract diseases. That is, it might find it difficult to urinate or its urine might be bloody or brown. When any of these occur, it is advisable to take your hedgehog to the veterinary as quickly as possible.
Possible cause of urinary tract diseases is infections or cystitis. The bladder stones also might be faulty, resulting in difficulty in urinating.

Hedgehogs can also suffer from reproductive diseases. While the infection is popular in females, males can also suffer. Uterine cancers, infected uterus, and mammary tumors are all possible diseases that your hedgehog reproductive organs can suffer from.
Prevention of these diseases include spraying female hedgehogs, having ovariohysterectomy performed on them at about 6-8 months of age. Neutering the males can help prevent testicular cancer.

Neurological diseases, also known as the wobbly hedgehog syndrome. As at the time of writing this piece, no known cure exists yet and sadly happens to about 1 in 10 hedgehogs. Symptoms include falling over, seizures, paralysis, and others.

How do I prevent these diseases?

Preventing diseases is very important. There are many ways to achieve that, however below is a list of some of the ways to prevent Salmonella and of course other diseases transmitted by hedgehogs;
• Wash your hands properly with soap and water after handling the hedgehogs, their cages and bedding. This is important so that if your hedgehogs have any diseases, you won’t get infected and consequently transmit to others around you.
• Avoid allowing children under the age of 5 from carrying or going near hedgehogs
• Avoid eating near hedgehogs or while handling them. In fact, endure they are far away from your food preparation areas.
• Do not kiss or hold hedgehogs close to your mouth.

Treatment of these diseases

The best treatment is to see a doctor as soon as possible. Whenever you notice any symptoms, it is imperative that you explain to your doctor how you feel. This will enable the doctor to know the necessary steps and medication to give to you. And if it is your hedgehog that is sick, an experienced exotic vet knows what to do.

Diseases and infections are no palatable conditions. Hence, it is important to be careful and be mindful of dealing around hedgehogs. While they don’t seem to be harmful, they can carry a host of diseases in their bodies. So, whenever you notice any symptoms in your body or that of your hedgehog, don’t hesitate to visit experienced professionals to sort you out.