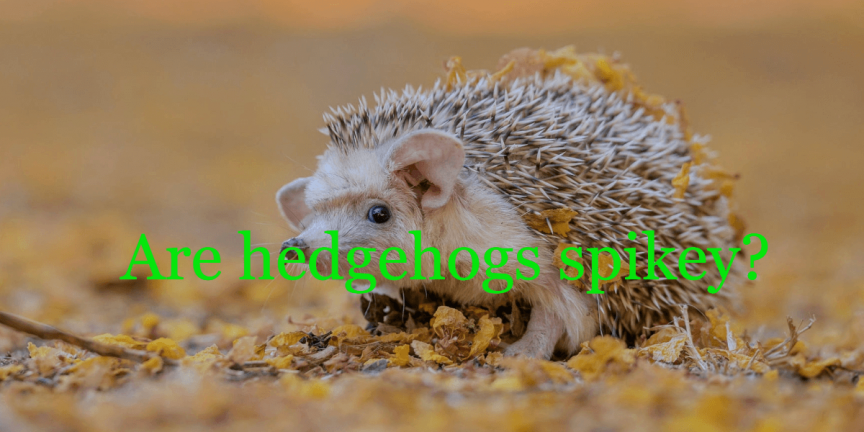 One of the key characteristics of hedgehogs is the stuff on their backs. In children’s books, illustrations show hedgehogs carrying mushrooms or apples on their backs. And many people are afraid to touch hedgehogs because the quills on their back look sharp enough to cause some pain, to say the least. In this post, we’ll cover everything you want to know about hedgehog’s being spikey. You’ll learn more in-depth about how their quills work and how to hold them safely despite their unique physical traits.

So, are hedgehogs spikey?

Yes, they are definitely ‘spikey’. They have even been called a pincushion with legs! Hedgehogs have a strong layer of spikes on their backs that are usually called quills. These are modified hairs. In other animals, the same hairs would be nice and soft. Hedgies, on the other hand, have them stiff and quite sharp.

Now, let’s dig a bit deeper into the topic of hedgehogs and their spikes.

Wait, do they have spikes or spines?

Language always carries a degree of ambivalence. That’s why people can’t seem to agree on whether hedgehogs have spikes, spines, or quills. And, sometimes, you might see quills being called prickles! Well, one thing is for sure. The scientific community and animal experts generally agree that hedgies have quills.

However, there are people who disagree with this approach. They say that these things are spines. That’s because porcupines bodily structures have the name ‘quills’ too. But when you compare their functionality, hedgehogs differ from porcupines. We’ll cover this aspect later.

If you want to be correct, then using spines or quills is the way to go. Spikes isn’t really the term that sees use in official or scientific texts. Of course, in regular use, people still call hedgehogs ‘spikey’ and refer to their quills as ‘spikes’. Colloquial language is different and doesn’t have strict standards.

What’s the difference with porcupines?

Hedgehogs are Old World creatures and porcupines are New World animals. They both have quills, yet there are crucial differences. Porcupines have barbed quills that vary in size and shape. These dangerous quills scatter all around their bodies. As opposed to this, hedgehogs have quills that are more uniform and unbarbed.

Let’s look at this matter biologically. Now there’s another important difference between these animals and their quills. In hedgehogs, the part of the quill growing out of the skin is bulbous. This is the reason why it does not easily dislodge from its place.

Are hoglets born with quills?

Yes, baby hedgehogs step into the world with their spines intact. Although, they are covered with a membrane full of fluids. It’s there to protect the mother during birth. This protection starts to shrink after a day passes. The process reveals over a hundred flexible spines that are white in color. At first, these quills are quite soft. But during the first weeks of life, these spines become harder and darker. Finally, there’s the quilling phase. During this period, hedgehogs acquire their adult spines that are there to stay.

Do hedgehogs defend themselves by using the spines?

Yes, but the defense is different compared to the porcupines. You see, since the quills aren’t barbed and won’t detach, it’s not a good strategy to actively defend themselves. Instead, these spines serve as inactive body armor.

When there’s a looming threat, hedgehogs roll into a ball. In this way, all the spines point outwards, sending a clear message to the potential predator. This is managed by using an amazing muscle called the Corbicularis panniculus. The tightened muscle keeps all the hedgehog’s soft bodily targets away from the attacker’s sight. The predators only face a ball of quills that makes the hedgehog pretty much inaccessible for them.

Completely true! And that’s where a fun thing called ‘self-anointing’ comes into play. This is a poorly understood behavior. Scientists are still debating what might exactly be behind this behavior.

Basically, self-anointing sees hedgies find a new scent first. Then they lick its source and top this off by producing a frothy liquid in their mouth. Ultimately, they proceed to cover their quills with this foam. We do know that hedgehog spines can absorb up to 10% of the spine’s weight in liquid. That’s quite a lot, which is why self-anointing works so well to retain a scent.

There are many theories why hedgehogs anoint. This might make hedgies unwanted to any potential predators. Additionally, it could serve as a way of communication. And the latter includes greetings and sexual messages. Another competing theory states that it’s a way to rid the quills of ectoparasites.

In reality, there might not be one particular reason for self-anointing. The behavior may result in a host of benefits that aren’t mutually exclusive. For example, some biologists believe that anointing helps to keep the quills fresh and shiny. While this might not be the main reason why they spread the froth over the spines, it’s definitely a useful side effect.

How many quills do they have, anyway?

Quills aren’t like teeth in humans. The number of quills varies between all the individual hedgies. However, it’s estimated that hedgehogs could have up to 7000 individual spines on their bodies. This estimate is averaged out across all the species. Smaller hedgehog species have fewer quills. More conservative estimates quote around 4,000 to 5,000 spines on their backs.

Why do hedgehogs lose spines?

There are two main reasons for losing quills. The first one is a natural process: ‘quilling’. The second one is an umbrella for a host of medical issues. Many hedgehog diseases exist that can make hedgies lose their quills. Usually, the result is patchy and accompanied by other alarming symptoms. If your pet hedgehog loses quills while not in a quilling phase, it’s definitely a good idea to pay a visit to the vet.

Quilling means replacing old spines with new ones. Humans, too, lose their hair to make way for the new ones. But since we have a lot of hair in the first place, the whole process isn’t noticeable under normal circumstances.

When hedgehogs undergo quilling, it won’t happen overnight. It’s a long process that takes a good amount of time. Usually, hedgehogs quill a few times in their life. The first shedding happens in the first three weeks until the twelfth week of their life. Then the process slows down, but you may still see some of it happening up to the six-month mark. All of this results in something called primary quilling.

But the later quilling phases are usually much quicker. These tend to last less than a few weeks. In some cases, these shedding periods can be as long as 3-4 weeks. Again, there’s natural individual variety at work, so it’s hard to describe a “perfect quilling duration”.

Are there hedgehogs who are not spikey?

So far, we have talked about hedgehogs who are in the normal range. While there are varying degrees of how many quills they have on the body, all hedgehogs do have spines. Or do they?

Basically, it’s possible to have hedgehogs that aren’t spikey. There are some genetic issues that could cause hedgehogs to be free from any quills. You could even say that these hedgehogs are ‘bald’. In the wild, these hedgehogs could never survive. When hedgehogs don’t have any quills, their life is in great danger. Any opportunistic predator could easily kill and eat them.

Also, the quills aren’t only for defense. Zoologists have discovered that hedgies’ quills serve a warming function too. Although the quills are less thick than healthy human hair, they still provide additional warmth to the hedgehog.

The bottom line: are hedgehogs spikey?

Yes, hedgehogs are spikey. But it’s more correct to say that they have ‘quills’ or ‘spines’. These terms see use in scientific circles as well. Quills protect them against enemies. Unlike porcupines, their quills aren’t barbed and won’t stick on the predator’s skin.