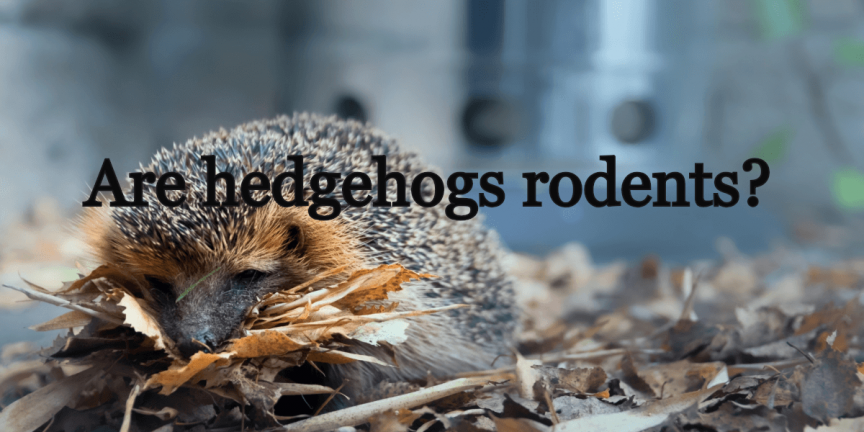 Hedgehogs seem similar to rodents in many ways. They are small animals, after all. And every hedgehog loves to chew on things as many owners can see. It seems like hedgehogs and rodents have quite a lot in common, right? Well, things may not be that simple. In this article, you’ll learn all about where the hedgehogs exactly belong. Also, you’ll learn about their similarities and differences to rodents.

Hedgehogs are not rodents. Instead, hedgehogs belong to the subfamily of Erinaceinae. They are closer to shrews than rodents. This can get confusing because true shrews look like mice. But, in fact, they are anything but rodents.

Similarly, hedgehogs aren’t related to porcupines, although the latter are classified as rodents. Both animals share the appearance of having quills on their backs.

Why aren’t hedgehogs classified as rodents?

Rodents belong to the order of Rodentia. Their main teeth grow continuously throughout their lives. The name of their order comes from the Latin word, which means ‘to gnaw’ in English.

Hedgehogs have a mouth full of teeth, unlike anything you see in rodents. For example, rodents don’t have canines, yet hedgehogs do have them. Rodents come with two big main teeth in front of their mouths. Instead, hedgehogs have two tiny vampire-like teeth.

As you can understand, teeth tell a lot about the eating habits of a particular animal. Mainly, rodents are herbivores. But hedgehogs eat a variety of foodstuffs, and this includes insects.

In fact, hedgehogs carry a set of teeth that is perfectly suited for eating insects. The tiny fangs work well for preying on creepy crawlies. The latter squiggle around while generally being covered in slime as well.

What animals are typical rodents then?

Many of our beloved small animals belong to the order of rodents. Actually, there are over 2,000 species of mammals that are classified as rodents. They are the largest group of mammals after all. Just take into account that there are under 4,700 mammals altogether.

Here are some of the most well-known species of rodents:

As you can see, many of the small animals featured in popular culture and folklore are rodents.

Now, it’s time to get back to the hedgehogs…

What is the classification of hedgehogs?

Hedgehogs used to have the classification of Insectivora. This one is now not in use anymore. Instead, they are in the subfamily of Erinaceinae. Altogether, there are 17 hedgehog species in five categories. They are found in the following regions:

They were introduced to New Zealand as well. However, there are no native species to the Americas nor Australia.

Hedgehogs share ancestry with shrews. People not well-versed in animal sciences might think that hedgehogs and porcupines are closely related. However, that’s definitely not the case. Porcupines, unlike hedgehogs, are rodents.

The closest living relatives to hedgehogs are moonrats. Despite their name, these small animals don’t belong to the group of rodents.

How do hedgehogs differ from typical rodents?

There are many differences between hedgehogs and rodents. We have listed all of the major differences in the list below.

Is there anything else separating hedgehogs from rodents?

Yes, there’s a very important distinction in their anatomy. Namely, hedgehogs don’t have a caecum in their bodies. It’s a part of the animal intestine that helps to digest cellulose. In this regard, people and hedgehogs are similar. We don’t have anything in our bodies with a specific purpose of breaking down hard plant material.

Rodents have this body part. For example, guinea pigs eating huge amounts of plant material relative to their body size. On the other hand, hedgehogs have a simple digestive system. They do eat plants every now and then. But it doesn’t constitute the majority of their diet.

What are the similarities in hedgehogs and rodents?

Once you really start analyzing their differences, it’s hard to see what’s similar about them. Most of the similarities are something you’d see when looking at things in a shallow way. This includes the following:

As you can see, there are some things similar in hedgehogs and rodents on a first glance. However, many of these similarities vanish once you’ll look deeper into the subject.

Can hedgehogs get along with rodents?

No, you shouldn’t put hedgehogs and pet rodents together. This includes mice, rats, guinea pigs, and others. They could get along without any problems, but this isn’t recommended.

Hedgehogs are not social animals. There’s not much for them to gain out of these interactions with rodents. Also, it’s likely that rodents could pass on numerous diseases to your hedgehog, or vice-versa.

Another aspect for consideration is that rodents gnaw a lot on anything that comes in their path. This could include your hedgie’s spines. These injuries involving their quills raise the risk of nasty infections.

Do hedgehogs eat any rodents?

Hedgehogs in the wild are opportunistic eaters. They are able to eat a wide variety of animal and plant food. This includes even eggs and tiny birds. But what about rodents, though?

There are some stories online that describe hedgehogs eating mice. There are definitely well-documented cases of hedgehogs eating tiny animals. Thus, it shouldn’t be far-fetched to imagine them eating small rodents, such as field mice.

That said, rodents are definitely not a food staple for hedgies. In the wilderness, they mainly eat invertebrates for animal protein. Other types of animal food come up only when opportunities arise.

The bottom line: are hedgehogs rodents?

Hedgehogs are not rodents. Instead, they are part of a distinct subfamily. While porcupines and hedgehogs look related due to their quills, it’s only the porcupines who are officially rodents.

Similarly, many people might think that rabbits are rodents. In fact, rabbits are not rodents as they belong to a close, yet separate group. Both hedgehogs and rabbits aren’t rodents, although they are in the midst of becoming more popular pets.