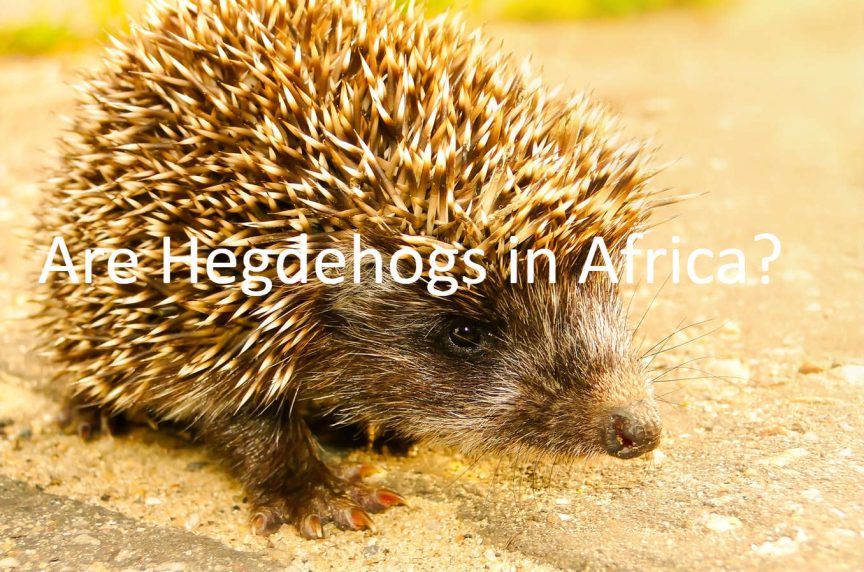 There are many questions that people have asked about hedgehogs. For a small animal, this little prickly thing definitely generates a lot of controversies. Some of them are rumors of magical powers. While some are questions of whether they lay eggs. One question that continues to make the rounds is the question of where their natural habitat is. Also, if by any chance… Africa features on the list of continents one can find them.

From the Atelerix genus comes the two African species used in breeding the pet variety found in the U.S.Atelerix . Another one is the four-toed hedgehog. This type of hedgehog hail from southern African countries. measures between 7-9 inches and weighs between 12-24 ounces. The North African species Atelerix is somewhat bigger. This type of hedgehog resides in Algeria. Hence it’s also known as the Algerian hedgehog. She has five toes on her back feet and a longer face than her southern African relative.

In appearance, both have chocolate colored quills. They also have a white belly.
The simple answer to the question if there are Hedgehogs in Africa is “Yes”. Hedgehogs do exist in Africa. In fact… The African Pygmy is the name given to these species of hedgehogs. Then, there is the North African hedgehog, Somali hedgehog.

About the African Pygmy

Also, known as the four-toed hedgehog. African pygmy hedgehog comes from sub-Saharan Central Africa. It inhabits savanna areas and crop fields. Their body is completely white. This characteristic emphasizes its dark head. The four-toed hedgehog has very short legs. This feature clarifies where it got its name. It only has four toes. They are smaller than other hedgehogs. They are at about 20 cm (8 in) long.

Four-toed hedgehogs can swim and climb. They can also be quite noisy and active. This breed is one of 23 extant. But they currently living hedgehogs in the universe. The African pygmy hedgehog is covered in tiny. It also has non-barbed spines like all other hedgehogs. And like other species of hedgies, these spines are different from porcupine spines. They are permanently embedded in the skin of the animal. These skins never shed.

The spine moves up into straight arrow-like positions. They can also flatten themselves against the skin of the hedgehog. This can be done through the contracting activity of the muscular ‘bag’ called the orbicularis panniculus. Atelerix is widely encountered in savanna and steppe zones of equatorial Africa. This region covers from Senegal to Ethiopia. It also covers south to the Zambezi River. It is sporadically found in drier regions of Africa.

Where is their preferred habitat?

The African pygmy occupies a variety of habitats. These include grasslands, woodlands, bush, thickets, plains, and agricultural land. They also live in suburban gardens. Atelerix prefers elevations at or below 2000 meters. The African Pygmy requires areas with dry soils.

They don’t seem to favor marshes or dense forests. Basically, they love places that afford them a wide range of shelters to choose from. They usually change their resting site each day. Including matted grass, leaf litter, rocky crevices, termitaries (termite mounds), or previously-dug burrows. They tend to prefer grassy areas with light undergrowth.

Like every other hedgehog species, the four-toed hedgehog is solitary. They only come together with other hedgehogs during the breeding season. They are extremely territorial animals. The African pygmy have a high tendency to show aggression. This happens if they feel their territory is getting encroached upon. In a territorial attack, the animal will erect the spines around its head and snort. It will also grunt, hiss, and butt heads with the offending individual.

Hedgehog found in Africa is another species of Atelerix algirus. This is smaller than the previous type of hedgehog. It tends to not surpass 20 centimeters (8 in) in length. The North African hedgehog lives across North Africa, including Morocco and Algeria. This type of hedgie currently remains in the wild along the Mediterranean coast including Valencia and Catalonia. It has a light coloring. It does not have any spines on the crown of its head. The Somali hedgehog or Atelerix sclateri is endemic to Somalia. It has a white belly. And its legs are usually black or brown.

They live in grasslands, scrub, rocky areas, Savannah, and suburban gardens. They rarely occur in deserts or in very wet areas.

One need for good habitat is that there must be dry cover available. Hedgehogs use this cover to rest. Furthermore, they use it to rear their young ones. Also, the dry cover should be close to available food.

Characteristics of Hedgehogs In Africa

Here is a list of things that are general to all hedgehogs irrespective of what part of Africa they are from.

Like all hedgehogs, the African pygmy self-anoints. This curious behavior usually occurs when the animal encounters an irritating substance. The hedgehog forms a bubbly foam substance in its mouth. Also, it subsequently rubs the mixture over its spines. A hedgehog was observed chewing the parotid glands of a toad. It then self-anoint with the toxic mixture (perhaps defense against predators).

The true reason for self-anointing is still unknown to scientists. But there is a hypothesis that it uses it to attract attention. Males from females and juveniles from their mother. Although its specific origin is unknown, scientists know that this is an innate behavior. Even juveniles, yet to open their eyes do this.

Reproduction is mostly the same

African hedgehogs have no clear mating season and breed throughout the year. They become sexually mature at approximately one year of age. Gestation lasts 30 to 40 days. Litters range in size from two to ten young male. Whereas females typically have one litter per year.

Neonates (babies) are born blind and naked. White spines emerge after two to three days.
Between 8 and 18 days, the eyes will open and the white, infant spines are shed. It will be replaced with spines of the adult coloration. At 40 days the young will go with the mother on foraging trips. However, they will eat increasing amounts of solid foods. This will go on until they are completely weaned.

The defense is the same

Hedgehogs defend themselves when threatened by rolling into a ball. This covers the face, belly, and legs from a threat. This nonetheless leaves an armor of spines to face the enemy. However, this is done when the hedgehog feels threatened or disturbed. Hedgehogs found in Africa also seem to anoint to protect themselves from predators.

Feeding system is the same

Hedgehogs found in Africa eat insects like termites and beetles. Other times they eat spiders, scorpions, and millipedes. They also eat a variety of other animals as well, such as invertebrates like snails, earthworms, slugs, land crabs. Eggs and plant roots, fruits, fungi are also part of their diet. These precious beings locate their food by sight, smell, and sound. They have the ability to sense food as far as 4 cm deep in the soil. They snap their live prey up into their mouth and chew noisily.

This is finally followed by muzzle licking. When a live prey is big… they shake it to death before they eat it. Atelerix will readily consume carrion.

They have been observed scavenging road-killed carcasses in suburban areas.

South African hedgehogs are predominately a solitary species. So, there is not a lot of social communication. Hedgehogs snort and growl in excitement. They make a weak twittering sound when uneasy or in strange surroundings.
Spitting and hissing is a reaction of a strange animal in the territory. A male will chatter and snort while courting a female. They can also fight with another male. A female will snort when courted. Female hedgehogs have a very high-pitched alarm call like a scream. Vision is poor with limited color, but they have an impressive sense of hearing and smell.

Ecosystem Roles for their African Homeland

African hedgehogs provide a source of food to those animals that do eat them. Yet, they are not a particular favorite of any species because of their spines. These Hedgehogs compete with other large insectivores for food… And this may force one of the two species to leave a habitat. Also, through their foraging behavior, African hedgehogs may affect populations of invertebrates and small vertebrates.

African hedgehogs may actually enjoy the increase of urban gardening. In turn, may benefit humans by eating garden pests. Some African natives harvest this hedgehog to use as food. Whereas some use it in traditional rituals. The belief is that smoke from burning spines and dried meat will keep evil spirits away. Also, the fat will cure earaches in children. This species is popular as a pet.

Apart from finding hedgehogs in Africa… it is actually a popular face on the continent. Besides, what most people breed and keep as pets is a cross breed of the two African hedgehog species.