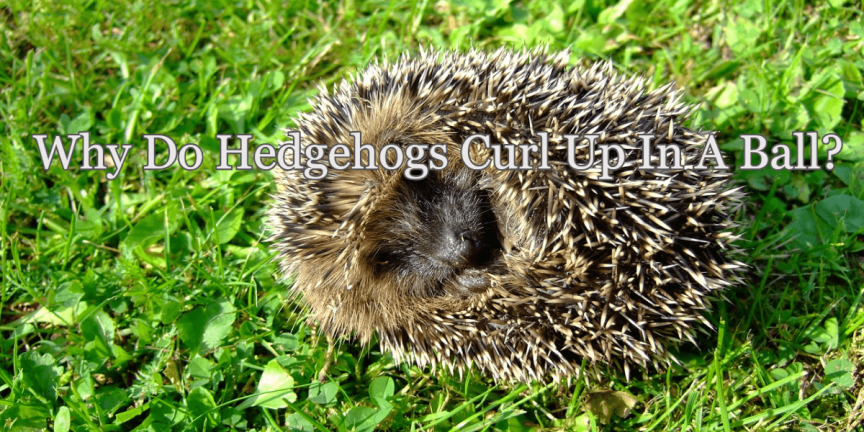 Have you ever seen a hedgehog that resembles a cushion of needles? If you have a pet hedgehog, then the chances of this happening are very high. In many cases, your hedgie will roll into a ball. And it can take some time until they calm down and resume their normal posture. In this post, we’ll go over the reasons why hedgehogs do this. Also, you’ll get practical tips on how to act when your hedgie has entered the ball-mode again.

Quick answer: why do hedgehogs curl up in a ball?

When you have a pet hedgie, they might curl up from stress, startling movements, anger, and fear. In this case, let your hedgie regain its composure. After some time passes, they’ll go back to normal again.

How does curling up into a ball exactly work?

Hedgehogs have a backside that’s covered in sharp quills. Although, for humans, these quills are mostly harmless. Unless you won’t press hard against them. These spines are different from the ones covering porcupines. Hedgehog spines aren’ barbed and they don’t come off the body after piercing someone.

Hedgies use strong back muscles to spread out all the quills. In turn, every single spine turns sharper. But part of this defense mechanism involves rolling into a ball. This is a signature reaction for hedgehogs when they are stressed, frightened, or agitated for some reason.

The resulting ball seems quite tight. Hedgehog’s enemies don’t have many ways of attacking them when they are curled up. However, it’s not the first reaction for most hedgehogs. Usually, hedgehogs try fleeing first. When that fails, then the last resort is curling up into a ball.

Hedgehog owners are familiar with this reaction. Especially when you have a young hedgehog on your hands, there can be various reasons for them to get scared. But as time passes, and they get more comfortable, you’ll see less and less this type of behavior.

How can you tell that your hedgie rolled up?

Actually, it’s a pretty obvious sight. When your hedgie curls up into a ball, you won’t see anything besides quills. Your hedgehog’s face and legs disappear inside the ball.

One of the best parallels is a drawstring bag. You need to pull the strings in opposite directions, effectively closing the bag. Something similar happens with your hedgie’s body. They contract two muscles. But this happens in the opposite direction. As a result, they pull the base of their spine resembling a ball from relaxation into an erect position.

The muscles pull on spines in different directions. Hence, a crisscross formation forms and the hedgehog receives protection from this evolutionary setup. To complicate things even further, their back and abdominal muscles enable them to tuck the head and tail inside the skin fold.

What should I do when my hedgehog reacts like this?

Since it’s a natural reaction, you shouldn’t worry too much. It’s important not to disturb your hedgehog when it has rolled into a ball. This means that he’s clearly disturbed and needs some time alone.

Of course, you could face a situation where just ITALIChave toITALIC put them elsewhere. In these cases, you may still handle your hedgehog. Gently put them back in the cage. Don’t hold them for too long when they are in this position. Respect their emotions.

How could I anticipate this reaction?

Sometimes, you can’t see the reaction coming. There are cases when pet hedgehogs curl into a ball because there’s a sudden sound coming from somewhere. That’s why it’s important to hold your hedgehog in a way that wouldn’t get your fingers stuck if they decided to perform the rolling.

When they suddenly roll into a ball, your fingers could trap in the tight ball. That’s no fun for you nor your hedgie. When you hold them, then try not to put your thumbs and fingers directly on the center of their belly. This is the area that can quickly close off when they startle or turn aggressive.

Are there hedgehogs who won’t curl up in a ball?

This is a deep instinct. It’s very unlikely to find a hedgehog who won’t carry this instinct in case of a dangerous or stressful situation. However, some pet hedgehog owners have said that they have never seen their hedgie properly curl up.

That’s why it’s entirely possible that you might not get the chance to see a curled up hedgehog. And that’s a good thing. This means that your prickly buddy feels safe and isn’t subject to stress or pressure.

Still, these hedgehogs may raise their quills when you catch them by surprise. Some hedgies won’t curl into a ball unless there’s something really annoying them. For example, a visit to the veterinary or waking them up in the middle of the day won’t create any positive feelings. These situations could end up in a curled-up state for some time.

Why else would a hedgehog not curl up?

In the British media, there was news of a hedgehog who was too fat to curl up into a ball. He was named The Big One and weighed about 3.8 pounds. Originally, he wasn’t that big. But after the animal welfare rescued him, he started to put on big weight.

Ultimately, there might be many reasons why your hedgehog won’t curl up. The important distinction here is this: unable or unwilling. Being unable to curl up into a ball is a serious medical problem. You need to get your hedgie to a veterinarian if you suspect a situation like this. In other cases, it’s completely fine if your hedgehog doesn’t see a reason to curl up.

Can you teach your hedgehog to ball up?

Not really. Although, some owners would like to teach this as ‘a trick’, it’s not possible. The position of curling up is deeply connected to a state of fear and agitation. Even if it were possible to teach the trick, it would definitely be a very unhealthy scenario.

Instead, if you want to teach your young hedgie something, then you can try your hand at litter training. Most owners can’t do this because few hedgehogs accept litter training. However, it’s definitely worth a try. The results can be delightful, especially as seen from the owner’s side.

Is there such a thing as ‘half-curl’?

Some owners note that they have seen their hedgehog do a half-curl. It seems that this is a relaxed position. They aren’t tense, yet they aren’t in their normal position either. When you see your hedgie perform a half-curl, and everything looks healthy and fine, then you shouldn’t worry about this. It might be just an individual variation in positions for the relaxation.

The bottom line: why do hedgehogs curl up in a ball?

Hedgehogs have a natural reaction to outside threats. When there’s no escape path, they will curl up in a ball. Doing this helps the hedgehog protect his life from predators.

Pet hedgehogs have the same instinct. As an owner, you might see this reaction frequently. Especially so, if you have a hedgehog who is just getting used to the new environment.