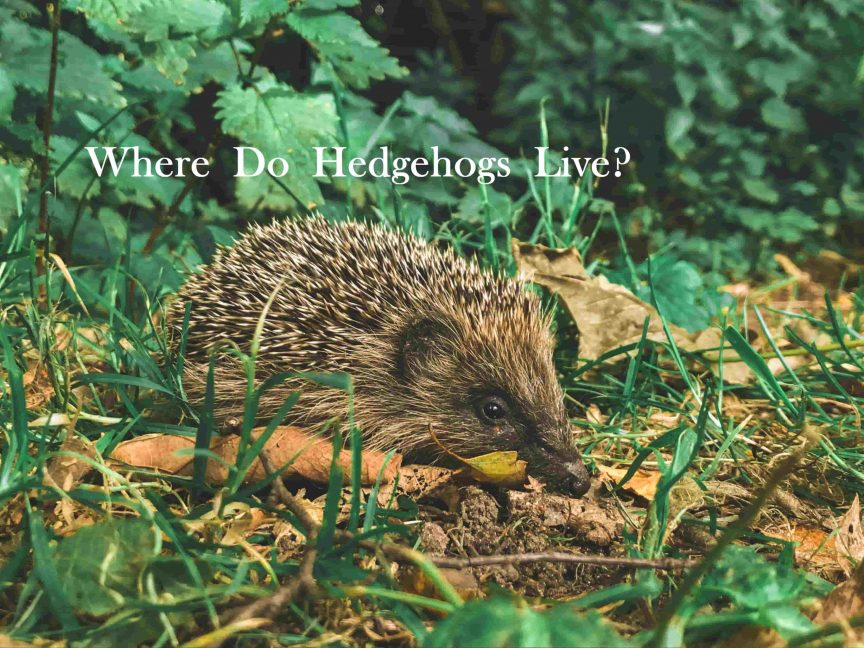 Hedgehogs are spiny rat-like mammals which are native to parts of Europe, Asia, and Africa. No species of hedgehogs are native to Australia and the Americas. But they have been introduced into both continents and they thrive both in captivity and in the wild.

The word “hedgehog” comes from a combination of two words “hog” and “hedge”. The former being another word for pig because of their pig-like snout. “Hedge” features in the name because the animal likes to frequent hedgerows in search of fruits and insects.

In today’s post, we will discuss Hedgehogs’ habits in the wild, the places where they are mostly found. We will also discuss the places with the best condition for hedgehogs to live.

Hedgehogs are 7-9 inches in length and weigh around 0.6 kilograms, in most cases. They also live for three to four years in the wild but may live for almost 11 years in captivity.

Hedgehogs have the same origin as rats, mice, and shrews. Hedgehogs have been around for about 15 million years. They have short limbs, and a body close to the ground, but their most recognizable feature is their spines. Their spines are hollow hairs made stiff with keratin.

Unlike the quills of its distant relative, the porcupine the hedgehogs’ spines are not barbed, and they are not detachable from its body.

Where in the world can you find native populations of Hedgehogs?

There are 17 species of hedgehogs in the wild, and as mentioned, they are in parts of Africa, Europe, and Asia. In Africa, hedgehogs favour dry climates. This leaves them with a territory that ranges from parts of central Africa to East Africa. They tend to avoid dense swampland and forest areas.

They stick to grassy plains and woodland areas. Hedgehogs tend to thrive most in warm climates where there are plenty of worms and insects to feed on. Because of the warm temperatures of the tropical regions, African hedgehogs do not need to hibernate in the winter.

In Europe, hedgehogs are usually found in the UK, France, Spain, Portugal, Italy and the parts of the Scandinavians that are not too cold.

Like African hedgehogs, the European hedgehog also thrives in meadows, woodlands, and grassland. Thus in places like the UK hedgehogs like to live near farmers’ hedges and gardens.

Hedgehogs are often regarded as “farmers’ friends”, as they eat all kind of worms and insects that can otherwise harm crops and flowers.

In Asia, hedgehogs generally live in central Asia, and parts of the Middle East. They are also native to countries like Russia, Turkey, as well as countries like Iraq, Afghanistan, Iran, and so on. As in Africa, they also tend to stay in the warm, pleasant areas close to people, avoiding the hot deserts.

Hedgehogs, especially in Europe, like to live in urban and suburban areas. Hedgehogs are omnivorous (they eat both plant and animal matter). This is why they particularly favourite hedgerows, because of the type of plants there, like mushrooms, grassroots, melons, watermelons, and berries form an important part of the hedgehog’s diet.

That is not the only benefit hedgehogs derive from these plants. The plants also tend to attract insects, toads, birds, etc. and they serve as a source of protein for the hedgehogs.

Also, most animals which are predators of hedgehogs like owls and foxes, wolves and mongooses also tend to avoid humans. This means the hedgehogs are safer.

Hedgehogs as a species are nocturnal (they only come out at night), but some species of hedgehogs come out during the day. During the day the hedgehogs sleep under bushes, grasses, rocks or in dens dug in the ground. These dens also serve as nests during hibernation (Hibernation is the state of inactivity and metabolic depression, in which the animal reduces its body temperature slows its breathing and heart rate and reduces its metabolism to conserve resources, especially when food is scarce).

Hedgehogs hibernate during the winter months when their temperature decreases (to about 36° F.). On waking up, its body temperature rises back to normal (between 86-95° F). A lot of garden owners find a way to link their gardens so that hedgehogs can move among them and get their much-needed exercise.

Given that even wild hedgehogs already live near humans and are familiar with our behaviours. Hedgehogs are very easy to domesticate. The practice of domesticating hedgehogs became popular in the 1980s.

It became so widespread that some states had to require that hedgehog pet owners have a license to own one. Some others banned the practice altogether.

Unlike wild hedgehogs, domesticated species prefer a warm climate of above 72°F. They also do not naturally hibernate. Wild hedgehogs are not territorial, but they like to roam around their territories. A hedgehog can cover at least 10-20 hectares a year. During the breeding season, a male hedgehog can cover up to 3 kilometers in one night.

Therefore if you want to keep a hedgehog as a pet, it is important that your enclosure has plenty of room for the animal to roam in. If a hedgehog does not have room to roam in, it may become depressed, and may sleep excessively, refuse to eat or engage in self-mutilation.

Apart from the natural instinct of the animal to roam, hedgehogs also need to move around because as small animals they are prone to obesity and liver problems. Thus it is important to allow your pets to exercise.

Cage Specification for Your Hedgehog

If you are getting a cage for your hedgehog, your cage must have a floor area of at least five cubic feet. Do not put your pet in a cage with a wired floor, as cages with wired floors are dangerous. Hedgehogs have poor eyesight and as a result, they can easily slip and get their limbs caught in the wire.

Some people use large glass terrariums, but those can be difficult to clean especially as hedgehogs tend to defecate while they are moving, leaving the entire enclosure covered in feces.

If you have the resources and the time, you can create a multilevel rabbit cage, so that the animals can have plenty of room to roam around without occupying much floor space.

What Form Of Exercise Is Good For Your Hedgehog?

Climbing the multilevel cage is a good form of exercise for the hedgehogs. If you are getting a blanket for the floor of your enclosure then you should get a polar fleece blanket. Polar fleece blankets are plush velour like materials used in making hotel bedding. They do not fray and it is very easy to clean.

Another good form of exercise that you can provide in your hedgehog enclosure is a wheel. Domesticated hedgehogs often like to run in wheels because it is a good substitute for roaming around. Hedgehogs can run up to five miles a night in a wheel.

When building a wheel for your hedgehog, you must ensure that the wheel has a solid floor, as an open wire wheel can cause the hedgehog to fall through and break a leg or develop sores which can cause infections among other things.

Also, wheels with crossbars are also not advisable as they can cause facial injuries for hedgehogs. Thus you can check your local pet store for a bucket like wheels for your hedgehogs. There are also several available online resources where you can find out how to make the best exercise wheel for your animal.

The most common DIY type of cages that pet owners use for their hedgehogs is the cage made out of cubes and chloroplast (or corrugated plastic). You can make your C and C cages larger than what you will find at pet stores. Also, you can build one on top of the other to avoid the need for shelving.

Hedgehogs are small and cute animals that breeders enjoy owning because they are neither aggressive nor territorial. Biting or stinging is not a thing with hedgehogs and also, they do not carry any diseases or infections. Hedgehogs are omnivorous and thus they can survive in any kind of food. They have no need for any special diets. They are also quite comfortable with humans, even the wild ones. Hedgehogs are also insectivorous; this means they will get rid of insect pests for you.