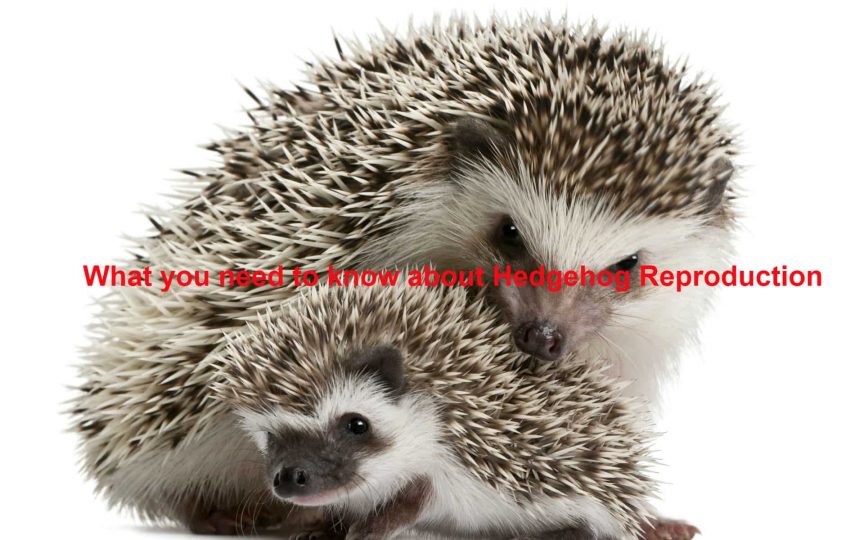 Hedgehogs used to reproduce solely in the wild because apparently… they are animals of the wild. Hedgehogs generally have a gestation period of about thirty-five days and an average litter of four to five baby hedgehogs who are born blind and deaf. They often weigh about fifteen to twenty grams at birth and depend on the mother for all sorts of nutrients which they get from her mammary glands.

The male is never involved in the care and raising of the little hoglets.
Little hoglets get weaned at about four weeks. At this age, they can leave the nest for a while because they can eat solid foods and fend for themselves a bit.
Now there are a bunch of processes that are common in the wild when it comes to hedgehog reproduction. The first stage of the reproductive process is:

This part of the process is highly dependent on a number of factors such as weather and climate which also directly translates to the ready availability of food and water. The hedgehog carousel, as the mating ritual is called consists of the male hedgehog circling the female for a couple of hours. The female usually reacts aggressively in the beginning. Basically snapping at and attacking the male. She tries to attack him with the spines on her back which can be harmful. The male approaches and woos the female by nuzzling her, snorting, and making loud squeaking sounds while he circles her closely.

Eventually, if things progress nicely enough, she would then calm down and become more receptive to the mating process. She would submit to the male hedgehog and it is at this point that mating itself happens.
The mating happens through the male hedgehog placing himself at her rear end and mounting her from there.

In order to prevent him from harm, she flattens her spines against her back while he performs his mating duties. Immediately after completion of the act, the couple would separate and go their ways. The male hedgehog continues on his way to find other females in who to sow his wild oats while the gestational countdown begins.

How many hoglets should I expect?

Between two and ten.
Hedgehogs can have as little as two in a litter and can have as much as ten hoglets in a litter. On an average, however, hedgehogs litters range between five to eight hoglets strong. In total, it takes about sixty to seventy days for the completion of the whole process. I.e; conception to young adulthood.

The fewer hoglets… the merrier though. So even if you do get as much as ten… it is best to find them homes as soon as possible.

Hedgehogs have a gestational period of about thirty-five human days. After this, the mother would give birth to an average of five hoglets who are deaf and blind at birth. They are expected to nurse for about forty days before weaning them. The bulk of the suckling happens during the day because she would have to go out to eat at night. Baby hoglets are born with about one hundred spines of their own and weigh between twelve and twenty-five grams at the point of birth.

At around fourteen days old, hedgehogs develop their first teeth and thus start venturing out of the nest in search of something to eat. They however rarely find enough to eat so they continue to practice every day till they become expert hunters too. This happens around the time that they clock six weeks. At this point, they become young adults and then go on with their lives until they are ready for the reproductive cycle too.

Now for hedgehogs in captivity

Things are a little different. You have to introduce the female into the enclosure or cage of the male and not the other way around. This is usually to make it easier for her. You cv leave them together for as long as one week after which it is best to separate them. Before putting them together, it is important to clear out all toys. Basically anything and everything that might be in the way.

It is important to know a few things before you decide to breed hedgehogs. Breeding hedgehogs in captivity come with a lot of responsibility. In the wild, nature takes its course and the hedgehogs involved know how to do what they do. Look after themselves and provide for their needs. Choosing to breed them by yourself is tantamount to absolving them of the responsibility of taking care of them and taking that responsibility on to yourself.
There are some questions you need to answer before you choose to breed hedgehogs.

Are you ready to look after hedgehog babies or undertake the effort of putting them down?

Sounds like a weird question. But in reality, it is a very important question. There have been times when hedgehog mothers reject their babies and refuse to nurse them or care for them. Will you be willing to take care of them? Feed them, keep them warm, and do everything that their own mother would do for them or alternatively put them down? Will you have the time to sit and play with them all, clean out cages, etc until they get a good home which you will also have to find?

do you understand the health risks that reproduction poses on female hedgehogs?

Are you ready to look after them completely?
This is another thing to consider. Female hedgehogs go through a lot of stress to birth their offspring and mating should be well spaced. Breeding hedgehog requires that you know what you are doing especially where hedgehogs are concerned. If you intend to breed hedgehogs, you must be willing to do a bit of research. You must also buy a new enclosure or cage for each new hedgehog you get because the truth be told, you might not even get someone to adopt them.

Starting from the point when you introduce the female hedgehog to the male, you need to know a few things like female hedgehogs behavior could change. She might become aggressive. She could miscarry if you don’t separate them on time after mating. The slightest threat to the hoglets could make her kill and eat them. She could even die during childbirth.
The male should be kept far away from her once she has the hoglets. In the wild, she knows how to instinctively avoid mating until she is ready.

But on captivity, she has little or no control over what happens to her. Putting her with the male hedgehog more than once in a year is a very bad idea because it could kill her. Right after birth, it is important to leave her alone. Make sure her environment is as quiet as possible. Also, it is important to resist the temptation to touch the hedgehogs until it has been about two weeks since they were born.

This is because the mother hedgehog could see the attempt to touch or hold them as a treat and she could eat them due to stress. Because hedgehogs are considered exotic pets, their veterinary care is also pretty expensive. If they happen to need a vet… will you be able to afford their care? All of them?

Generally, I am of the opinion that hedgehogs should be allowed to reproduce under circumstances that are as natural as possible. That way, there would be a bigger and better chance that they would have a successful breeding cycle. And if they are bred in captivity, breeders should recognize their responsibilities and take them wholeheartedly and completely.