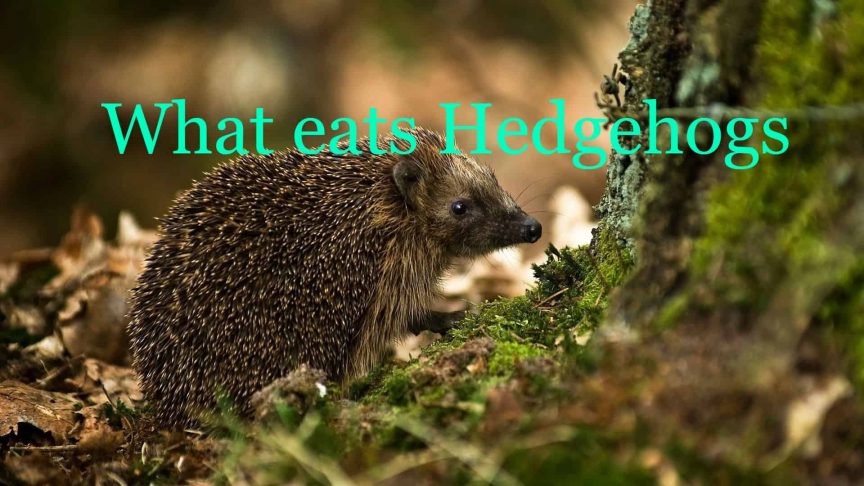 Hedgehogs are small mammals that are very similar to porcupines, rodent, tenrecs, and echidnas in appearance. Even though they are not biologically related at all, these sorts of animals are small and would be easily preyed upon but for the fact that they have those characteristic tiny spikes on their spines. Those spikes make it difficult for most land animals to prey on them. They would generally be left alone except of course if the animal was desperate.

These little animals have coverings of prickly spines. They use it as a defense mechanism against predators by curling into a ball when threatened. They basically look like a ball of pain from the way the spines stand out. The mere sight of the spines will steer off most of the predators and potential predators. But then there are certain predators that are able to successfully hunt and eat hedgehogs. These predators include birds of prey like hawks, several types of carnivorous mammals, some snakes, and humans.

Here is a list of animals that could pose a threat to the hedgehog or even eat them.

There are quite a number of owl breeds. These include those that are not really interested in meaty meals and those that are definitely inclined to be carnivorous. Large owls, like the Eurasian eagle owl, commonly feed on hedgehogs.
The reason for this is that these owls and hedgehogs are nocturnal. They both sleep more during the day and center most of their activities to night time, their paths will most probably cross at some point. Because of the Eurasian eagle owl’s ability to fly as quietly as possible, flapping its wing in a barely audible fluid motion, the hedgehog rarely ever sees it coming and thus doesn’t get the chance to curl up into a ball of spines like it usually would when threatened. This lack of warning makes hedgehogs particularly susceptible and vulnerable to these owls, thus making them a staple diet.

Wild dogs, Jackals, domestic dogs, will often eat a hedgehog. The dogs seem to have found a way to force a hedgehog to release itself from the spine curl up that would usually protect them from predators. They basically find a weak spot, (usually the place where the two ends of the hedgehog meet) and push their nose into that spot. Thus forcing the hedgehog to release itself from that position and then the dog would eat it.

Domestic dogs can be indifferent towards hedgehogs. It is really dependent on the individual temperament of the dog. Some dogs will even be friendly while some would be aggressive. Hunger, however, could make a friendly domestic dog aggressive and thus increase their likelihood to attack hedgehogs.

Most snakes leave hedgehogs alone, while some will definitely attack and kill them for food. Most of the time, older hedgehogs are safe from snakes. But younger hedgehogs stand very little chance against them. Even though hedgehogs are immune to snake venom, they are not immune to suffocation and swallowing and thus if the snake is big enough and the hedgehog is small enough, it could definitely get eaten by a snake. And this happens a lot too.

The weasel family, an animal family widely known to predate on hedgehogs. These equally small animals seem to have developed a specific liking and inclination for the hedgehog and thus, it was no surprise when a study of wild weasels in New Zealand revealed that hedgehogs were a main source of food for these slightly bigger animals. Everywhere there were hedgehogs, there seemed to be weasels.

Mongooses, especially the species popularly known as the Indian gray mongoose predates on at least one species of hedgehog, the Indian hedgehog. They have been known to attack cobras, a very unlikely prey for an animal like that. So it is probably no surprise that the mongoose has the inclination to attack hedgehogs.

Their intelligence and sheer perseverance help them to take on the challenge of a curled up ball of spines like the protective hedgehog.
It is very likely that the mongoose employed such tactics as they use in breaking eggs open to access the hedgehogs. The mongoose would pick up the hedgehog and throw it hard against a rock or any other hard surface, forcing it to uncurl through the sheer force of contact or the shock of it. Then it would attack from the softer parts of the hedgehog’s body such as its underbelly. Whichever way, however, mongooses are hedgehog terrors.

Badgers didn’t use to be threats to hedgehogs. Not on a large dangerous scale anyway. In fact, until recently badgers weren’t even actively considered a threat to the hedgehog population. Since prehistoric times, badgers and hedgehogs have happily coexisted, competing for the same diet of worms and slugs.
The feeding relationship between the badger and the hedgehog used to be mostly opportunistic. If the badger was hungry enough, he might attack a hedgehog. But even then, it wasn’t very commonplace as they seemed to prefer a staple diet of earthworms.

Besides the badger’s apparent lack of interest in the hedgehog for feeding purposes. There was also the fact that hedgehogs had a lot of places to hide from the badger even if the badger did decide that he wanted a hedgie snack, the hedgehogs were fairly protected from them.
But with the deforestation and degradation of habitats, badgers and hedgehogs have more run-ins now than ever. Deforestation has not only affected the hedgehogs, but it had also put the badger in a delicate position too. Thus the idea of hedgehogs as a meal has steadily grown and with it, the taste and desire of the badger.

Just like the owl, hawks also seem to have developed a particular liking for hedgehogs meat. They snatch the hedgehogs away from the floor and tear them open with their sharp claws. The spines are rarely a deterrent once a hawk has a hedgehog in its sights.

Foxes, known to sometimes kill and eat hedgehogs. Usually, foxes would not easily attack or kill an adult hedgehog because of the strength of their spines. The spikes would sufficiently protect the hedgehogs from the fox. But in the case of smaller, younger or sick and wounded hedgehog, protection is not as assured.

Because foxes seem to adapt very well to any habitation, they are predators to reckon with and a constant fox presence in hedgehog habitat will not be good news for the hedgehogs at all. It is worthy of note that most of the times when hedgehog remains are found in the stomachs of foxes. It is often the result of scavenging roadkill rather than active or intentional hunting.

Ferrets are hunters. Vicious carnivores. The thing is, a lot of pet lovers also keep them in domestic settings. Ferrets will attack animals as big as rabbits and they will chew up turkey neck to nothingness. Their strong sharp teeth will chew through nearly anything else. Ferrets and hedgehogs are rarely good together and in the wild, it can be a vicious battle.

Adult hedgehogs might succeed in fighting off a ferret. But younger hedgehogs really do not stand a chance. There have been some rare cases where ferrets and hedgehogs got along in domestic environments. Their continual civility to each other however is now guaranteed because no matter what, ferrets are predators and hedgehogs are prey.

Yes… hedgehogs eat hedgehogs. It is a surprising fact but that’s just what it is. Now it’s not what you are thinking. Hedgehog doesn’t hurt each other and eats each other. Rather, the way they kill and eat each other is in the case of infants and mothers or infants and fathers. There are some cases where male hedgehogs are placed with nursing female hedgehogs; they will most likely fight, and the stress can make the female hedgehog eat her own babies. Also, male hedgehogs are very likely to eat baby hedgehogs if they stumble upon them.
In a situation where a mother hedgehog feels threatened, perhaps because she senses a predator, she would eat her own babies in order to prevent the predator from eating them in which case she would lose both ways.

Considering that hedgehogs are small and didn’t have much of a meat chunk, one would think that humans wouldn’t be much interested in eating them. But surprisingly, humans have also hunted and eaten hedgehogs for centuries. Some cultures even believe that the hedgehog has medicinal properties, spiritual benefits, and magical powers. Gypsies roast and eat it, but that’s not all. There are some human cultures that catch and prepare hedgehogs, then sell in open markets for food, charms or other supposedly magical items.