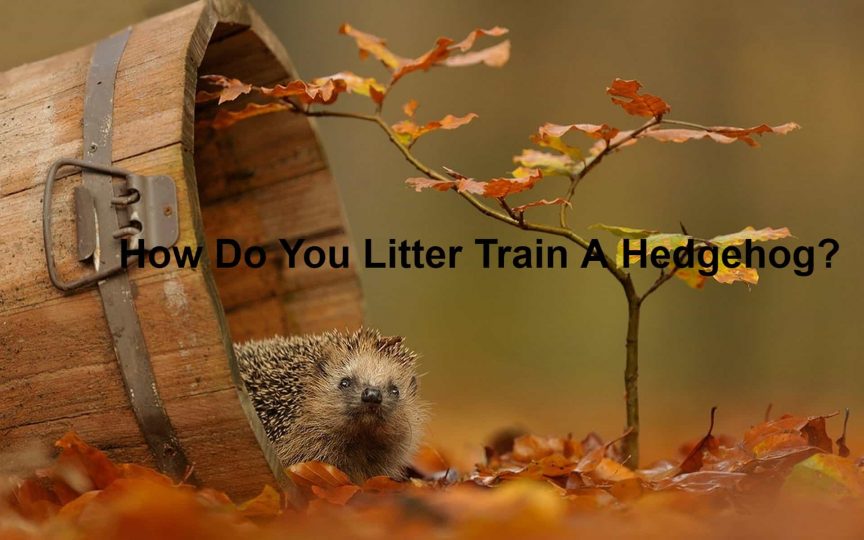 Many new hedgehog owners are baffled by this question. Is it even possible to litter train your hedgehog? And if yes, then how on Earth do you start training them? In this article, we’ll go over all the typical questions and worries regarding the hedgehogs’ litter training. It won’t be an easy task, but we are sure that after reading this post, you’ll have a much better chance at a successful training.

Litter training means patience and persistence. Put the litter box in a place where your hedgehog relieves its urgent needs most frequently. Use paper towels, processed paper cat litters, or fresh wood shavings. The litter pan should have a comfortable entrance along with higher walls. Keep the pan away from food whenever possible. Always put the stray poop inside the litter pan to encourage using this box. Don’t be too disappointed when your hedgie won’t start using the litter pan. Not all hedgies successfully complete the training and it’s entirely normal.

Why would you want to start litter training?

Using a litter pan carries many benefits. First of all, you will definitely save time on cleaning the cage. Hedgehog poo is notorious for creating a mess in the cage. It’s much more convenient to have most of the fecal matter in one place. Additionally, it might not only save time but money as well. When there’s less poo lying around the cage, you’ll need to replace less amount of bedding on a less frequent basis. And many owners are happy to provide their hedgies more freedom thanks to the litter training. When they are properly trained, hedgies moving around the safe designated spaces of your home creates less concern.

When is the best time to start litter training?

Better late than never? Actually, it’s best to begin the training as soon as possible. This means taking the first steps towards securing their poop in one place straight after bringing them home for the first time. There isn’t any data available about the effectiveness of starting the training over time, yet it’s quite likely that younger hedgies are more open to learning new behavior. One of the strategies is to put the exercise wheel in the cage after a few days after bringing the hedgie home. In this case, your hedgie won’t learn to use the wheel as the sole place to poop. Quite many owners recommend this approach. There might be no turning back after establishing the habit of using the wheel as a method of release.

Which litter is the best option?

The particular type of litter used is a central challenge in the game of litter training. Many newfangled owners considering litter training aren’t sure what type is the best. Also, there are talks about certain litters being dangerous. The latter is true: you shouldn’t use clay litter, clumping litter, and pellets from processed pine wood. Instead, simply using paper towels is a great option. They are cheap and you can continually see the state of your hedgie’s bowel habits. This is important because the regularity and the results of bowel movements tell you a lot about their health. The white paper towels immediately reveal any urgent medical problems. For example, if the poo contains blood, you can easily spot it and take you hedgie to the vet.

Not all owners like paper towels, though. As an alternative, you are able to use cat litters made from processed paper or fresh wood shavings. You need to make sure the wood shavings aren’t containing any cedar wood as it’s a significant health hazard to your hedgie. Dust-free litter is available, but it’s not a necessity. Dusty litter will likely pose no health risks to your hedgie. One of the main recommendations is to use a different substrate in the litter pan compared to the one used in the cage. This will give out clear signals to the hedgehog that the area is different for some reason.

Time to buy the litter pan. But which one?

The most important part is the litter inside the pan. Litter pan itself has fewer restrictions. The two main things to look out for are restricting the litter pan securely in one place and making sure it can fit under the exercise wheel. Some owners even opt for a litter pan that’s big enough for the wheel to be accommodated inside the box. However, this is up for your personal preference. The reason for putting the litter pan under the wheel comes from the fact that you hedgie poos the most while running on the wheel. Keep in mind that not all owners use this strategy. You could place the litter pan anywhere in the cage.

Make sure one side of the litter pan is low enough for your hedgie to enter the box. That’s why ferret litter pans are popular among hedgehog owners. These pans are high on all sides except the front that’s low enough for the hedgehog to get in. Another thing to consider is the potential to move inside the box. It should be big enough for your hedgie to comfortably turn around. The litter pan should be placed as far from the feeding area as possible. This ensures minimum risk of contamination.

All set! How do I start litter training?

There’s no golden rule of hedgehog litter training. Hedgie owners try all sorts of tactics to get their hedgehogs doing the deed in the right place. Still, one of the most popular approaches nowadays is to put the litter box under the exercise wheel. Clean the wheel on a daily basis to ensure the wheel is nice and clean when they start exercising again. If they have any poo outside the litter pan, then put the droppings in the box. In a way, this allows them to act on the scent and get the general idea where all the poo accumulates.

Another approach is just to place the litter pan wherever your hedgie makes the most of its poo. This could be anywhere in the cage. Just make sure the pan is far away from the food. If your hedgie tends to poo close to their food dishes, then try still to put the litter pan a bit further away. The latter is quite unlikely, however, since hedgehogs tend to keep their urgent needs and food in separate places.

It’s very important to be reliably consistent. Skipping days is bad because it interferes with your hedgie’s ability to start mapping the correct habits in their brain. Routines are created by being adamant about certain procedures every day. Soon enough, you might start noticing that your hedgehog gets the general idea where all the poop is supposed to be. It’s never a bad idea to reward good behavior. Did you hedgehog poo in the right place? Let her have a nice treat.

Does litter training work outside the cage as well?

When you let your hedgehog play outside the cage, then try putting the litter pan close to them. Some hedgehogs pick up the scent and will poo inside the box even when it’s outside the cage. Still, this is highly dependent on the particular individual. Not all hedgies will reliably pick up the cue outside their cage. Just try to take it calmly. If your hedgie won’t use the litter pan outside but does the deed in the right place inside the cage, then it’s still a big victory in the art of hedgehog training.

It’s not working at all! What can I do?

Try to have a litter training routine for at least 2-3 weeks before even starting to think about giving up. Some hedgehogs just need time for that. There are some practical steps you can take to further the cause. For example, changing the bedding type or buying a larger pan could work wonders in some cases. But if these steps don’t work, then there’s just nothing to do about it. There have been cases where a hedgehog entirely uninterested in the litter pan starts to use it after a few months of ignoring. Even before starting the whole process, keep in mind that not every hedgie is up for litter training. It’s quite individual and there aren’t really any indicators about their potential before actually starting the training.

Sometimes hedgehog litter training behavior is compared to humans. We all know people who are way more messy than others. Since we are all animals, it’s not far-fetched to assume that hedgehogs carry these unique personality traits as well. Some hedgies just like to poo in random places and they won’t accept the litter pan as the only solution to an urgent need. The same thing goes for acquiring new skills and behavior. Not all hedgehogs are fast learners. It doesn’t mean they are worse than others. They have the same brains, but these just might be wired a bit differently, resulting in longer times for learning to use the litter pan.

Hedgehog owners may face the scenario where their hedgies generally comply with the litter training, yet aren’t too accurate while relieving themselves. That can become even more frustrating compared to hedgehogs that don’t go along with the training at all. In the latter case, you can just forget about the whole idea. But when they are inaccurate, you may get the sense that there’s something you could do about it. In reality, there aren’t any well-known strategies to increase the hedgies’ accuracy.

Usually, the worst cases involve making the poop on the exercise wheel. That’s why some owners insist on putting the litter box under the wheel. Others feel that this is wrong. They argue that doing this only encourages messy toilet habits. Overall, it’s good to give your hedgehog some time. As they progress on the litter training, the accuracy might get better. But no hedgehogs will achieve the level of human-like standards when it comes to using their ‘toilet’.

The bottom line: how do you litter train a hedgehog?

Litter training your hedgehog is not an easy task, yet it can be rewarding. You need litter and a litter pan alongside patience and persistence. Also, forgiveness is important because not all hedgehogs will end up successfully litter trained. That’s completely normal. As a starting point, put the litter pan in the places most frequently used for relief. Never expect instant results. Sometimes litter training takes weeks, but there have been cases of a sudden interest in the litter pan after a few months.