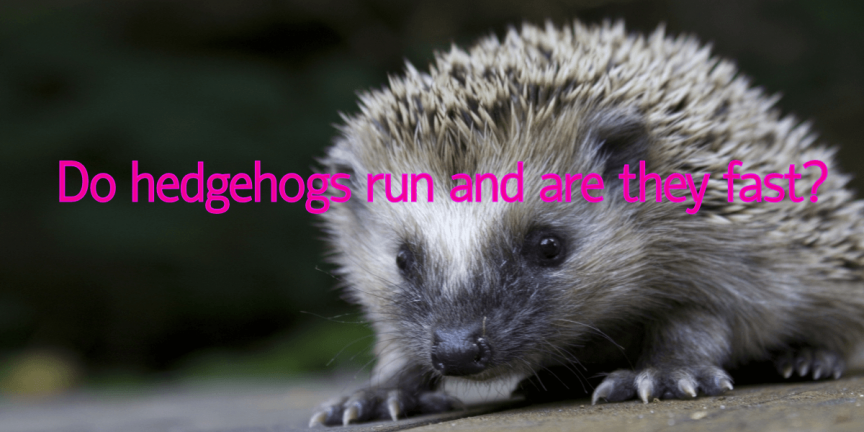 Do you have a pet hedgehog or planning to get one? They are friendly companions that do come with their own quirks. Better do your homework before taking one as a pet! Now, you might wonder whether hedgehogs are fast or slow. Do they run or just walk around? Things might get especially confusing when we talk about hedgehogs that are in the wild. In this post, you’ll learn all about hedgehogs habits, needs, and abilities when it comes to moving around in the big ol’ world (or cage!). Also, we’ll touch upon the subject of providing enough opportunities for the much-needed motion therapy to your hedgie.

Yes, they absolutely do!

So, are hedgehogs fast then?

Yes and no. Yes, they are fast, given their size and body shape. No, they aren’t fast when you compare them to many other animals. Their top speed estimates are around 4 miles per hour. Even compared to guinea pigs, that’s a bit on the slower side. Cavies can sprint at a speed up to 5.5 miles per hour. Thus, hedgehogs are fast for their bodily constraints, but slower when compared to others. You might still be surprised when you see them running in real life. Doesn’t look that slow!

Why are people impressed with hedgehogs running?

That’s easy: what they lack in leg thrust power, they make up in stamina. It’s hard not to get impressed by their nightly feats. They can cover up to 8-9 miles in a single night. Consider the fact that even not many people working a desk job would score eight miles in a day. And now, consider the tiny legs that hedgehogs have. No doubt that it takes much more effort and energy for them to cover the same distance compared to humans.

Mika McKinnon is a writer for Gizmodo who measured her hedgehog’s activity levels during the night. When she converted the footsteps into our standards, we’d have to run over 35 miles to match their effort. This amounts to a lot of running! Definitely, it’s something for ultramarathoners. Now you can clearly see how the fact that hedgehogs aren’t that fast doesn’t disqualify them from the athletic hall of fame.

Why are hedgehogs running in circles?

Hedgehogs have many unique behavioral traits. One of the infamous ones is self-anointing, something we cover in our blog as well. Another curious activity is running in circles. For humans, it may seem perplexing. For all we know, the running may seem strange to dogs as well: where’s the tail to catch?

Many pet hedgehogs have noted this phenomenon together with scientists focused on studying hedgehog behavior. There have been instances of hedgehogs running in a circle for a few hours straight. No time out! How do they even manage this? The interesting fact here is that when these hedgies stop running, they behave in a completely normal way. It’s definitely not a disorder nor some neurological confusion from some underlying disease. This behavior needs to come from somewhere else.

Their speed while doing this can range from a simple walking pace to actual running up to 4.5 miles per hour. Most of these scenes are described as solo ventures. Other times, the little balls of spikes may do this together with a bunch of others. When many hedgehogs do a full circle in a seemingly endless fashion, they might have a courtship ritual going on there.

At first, when this behavior received descriptions in the literature, some suggested that this results from an illness. For example, they might have an imbalance of the inner ear canals. Another theory stated that these hedgies had pesticide poisoning. Finally, people even claimed that this surprising behavior may result from a parasite running wild in their body.

The most controversial theories state that hedgehogs run in circles because they are stupid. Actually, that particular approach isn’t the smartest way to explain animal behavior. Some people have pointed out that hedgies run in circles before running for miles on end during the nighttime. This may seem like a waste of energy. In reality, we can’t see into the motivational pathways of hedgehogs. There might be an underlying logic of conducting these runs, but we just can’t wrap our heads around the fundamental causes.

What do hedgie owners need to know about running?

If you have a hedgehog, you need to make sure that your spiky friend gets all his needs met. Essentially, this means getting enough food and rest together with the right temperature, and… And they need exercise! Meeting the exercise goals commands having a possibility to run each night.

Obviously, you need to have the cage set up for running activities. In the wild, many times hedgehogs follow a straight line. They scavenge for food, covering a lot of miles every single night. They still have this instinct as a pet. And it’s more than a mere want. Hedgehogs need to run in order to remain healthy. Kind of the way humans need at least some exercise not to lose their health.

How can I provide a running space for my hedgie?

You need an exercise wheel in your hedgehog’s cage. It’s one of the essentials. You can’t do without it. Note that most exercise wheels available in the shops both offline and online aren’t suitable for hedgehogs. They are better for hamsters or other small animals.

Ideally, you’ll get a designated hedgehog wheel for your cute buddy. Opting for a random wheel built for rodents significantly raises the risk of accidents and injuries. In a way, it doesn’t only increase the risk, the risk is going to materialize sooner or later. You need to make sure that the exercise wheel is up to the task. Take a look at the following list of things to note about the wheel.

These are the main points to follow for ensuring your hedgehog has a happy, safe running experience every night. You are welcome to read more about this subject on our blog post regarding exercise wheel issues.

Do hedgehogs really run and poop at the same time?

Yes, and any hedgehog owner can attest to that after cleaning the area under the exercise wheel. When hedgehogs run, the activity puts a strain on their bowels and urinary tract. It’s just an automatic reaction. All the running kickstart the hedgehog’s metabolism, resulting in urgency that no hedgie will try to resist. This has been compared to the human experience of consuming a warm, caffeine-rich beverage in the morning.

Keep in mind that hedgies in the wild will just keep on running. They will leave all the feces behind. But as pets in a household, they’ll continue to run through their poop. And this is something that they can do nothing about. Hence, it’s up to the owner to take care of this issue. You need to clean the exercise wheel on a daily basis. Also, you should give them regular foot baths. Use a shallow sink or just a dampened cloth. Most owners do this once or twice a week to ensure optimal hygiene.

The bottom line: do hedgehogs run and are they fast?

Yes, hedgehogs know how to run and they are quite good at this. While their speed isn’t comparable to many other animals as it’s slower, they are still amazing when it comes to their ability to cover large distances.

If you have a pet hedgehog, you need to make sure they get enough exercise every night. For them, exercise comes in the form of running. The only viable way for that is to have an exercise wheel inside the cage. Make sure you get a proper wheel. Generic products for rodents won’t work and can endanger your hedgehog’s life.