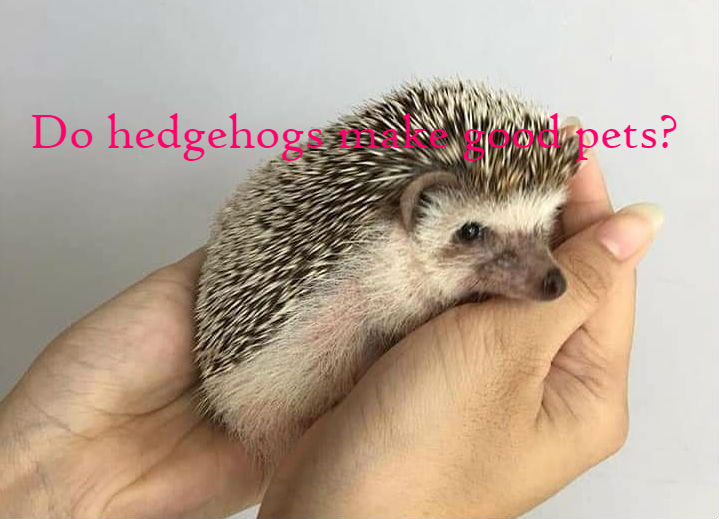 Hedgehogs find their way into more and more homes every year. Still, these spiky creatures aren’t the most popular pets. Their numbers are far from guinea pigs, hamsters, and rabbits. If you have ever wondered if hedgehogs make good pets, then you have come to the right place. Read on to find out what kind of pets hedgehogs really are.

SO, Do hedgehogs make good pets?

The question has two answers. The first one is yes because hedgehogs can be wonderful family members just like dogs or cats. The second one depends on you. Hedgehogs don’t make good pets for all people. You need to understand what are the specifics of having a hedgehog as a pet. Then you can decide whether it’s the right choice for you. Let’s take a closer look at the differences of hedgehogs compared to other pets.

Guinea pigs love human attention and sometimes seem not to get enough of it. The same goes for dogs and some other popular pets. Don’t get us wrong! Hedgehogs do need some interaction every day, it’s nice to devote an hour on a daily basis. But besides that time, they don’t need more playtime or social activities with people. Hedgehogs aren’t the best option for people who want to shower their pets with constant attention.

Yes, hedgehogs aren’t exactly the most interacting type of pets. Still, they do bond with their owners. Some pet hedgehogs owners have described how their hedgie has learned to recognize their voice and smell. Also, you are able to take practical steps to make them less afraid of people. Love and care from humans teach the hedgehogs not to become fearful. At first, they might be curling up as a defense reaction quite often. As time passes, they’ll start having this reaction from getting frightened less and less.

Ferrets are notorious for having quite a lot of body odor. On the other hand, hedgehogs don’t have a distinct odor that would be offputting for some people. It’s important to keep their cage clean at all times. Otherwise, it’s not the hedgie’s fault when there’s some unpleasant smell lingering around the cage. Also, keep in mind that if your hedgehog does start to smell, it might be time to visit the vet. The strange smell could indicate an illness.

Some pets are better off when they are put together with others of their kind. Hedgehogs need their own space, though. Putting them together, especially the male ones, might end up with fights that have disastrous consequences. If you plan to have more than one hedgehogs, then you need to have two separate cages. Doing otherwise puts your hedgies’ lives into danger.

This really depends on the particular hedgehog. Some of them could easily be trained to use a litter box. But not all will agree with relieving themselves into the litter box. It’s a well-known fact among hedgehog owners that the little ones often poo while they are running around. If you absolutely insist on having a pet that’s trained for using the litter box, then hedgehogs might not be the best choice.

Hedgehogs love foraging. And they will grow extremely stressed if this base activity isn’t periodically satisfied. You need to create a safe area where your hedgie can freely roam around. Also, keep in mind that they will leave plenty of droppings behind. Be ready to clean up after your hedgehog when she’s enjoying the time off from the cage life.

Many people wonder whether living in an apartment could be detrimental to hedgehogs’ well-being. Actually, you don’t have to worry about this at all. Their cage doesn’t have to be gigantic. They need a safe space where to scurry around. You are able to easily create that in most mid-size apartments. If you are having other pets at home, then try to have some safety measures. You don’t want either side to get hurt!

Know about the health risks

Just like people, hedgehogs can carry different diseases. Some of them are dangerous only to themselves as these illnesses won’t affect the people living under the same roof with them. That said, there are some health risks you should know about. For example, hedgehogs can carry Salmonella without having any symptoms. That’s why doctors recommend washing your hands every time after handling your prickly buddy. Also, it’s not a good idea to kiss them for the exact same reason. While that’s a bit rarer, there have been cases where humans have gotten internal parasites from their pet hedgehogs. You should always keep good hygiene to lower the risk of contracting any bacteria or parasites.

And no, we don’t mean a vet who only sees hedgehogs. They are quite hard to come by. But your hedgie’s vet should have prior experience with hedgehogs. There are some illnesses that are unique to hedgehogs, which means being educated and experienced with their unique medical side is important. Visit a vet annually. This allows you to know if there’s anything suspicious going on as soon as possible.

If there’s any serious reason why you simply can’t have your hedgehog around anymore, then it’s vital to find a new home for them. You need to understand that hedgehogs do live in wild, but these aren’t the same creatures in your home. When your little spiky fellow has grown up in domestication, there’s absolutely zero chance they’d survive in the wild. The only acceptable solution is to have them join a new family.

Cage in the bedroom?

Hedgehogs are nocturnal animals. That means they really start living their lives during the nighttime. And this can be quite noisy. In order not to be frustrated, put the cage somewhere where you don’t sleep. It’s only a good idea to have the cage in the bedroom if you are a very hard sleeper. For example, they use their exercise wheel during the ungodly hours, which can wake up you or your other family members.

Not the best option for children

We know, we know. Most kids think that hedgehogs are simply cutest animals. Adults tend do agree. But there are quite a few reasons why hedgehogs might not be the best option for your children. The quills aren’t too dangerous, but they can cause minor injuries if the pets are handled roughly. Also, children might mistakenly pet against the quills’ growing direction. That can hurt.

Furthermore, hedgies don’t love a lot of noise. When kids are playing around hedgehogs, then all the noise and racket could really stress out the small animals. Additionally, you really have to be careful when you handle the hedgehogs. Not primarily because of your well-being, but your hedgies’ health. Roughing around or accidentally dropping them might result in life-threatening injuries.

Get ready for spitballs!

Yes, spitballs are a thing when you have a hedgehog in your home. When hedgies find something with a scent they haven’t experienced before, they will lick it and make a spitball in the mouth. That ball contains the new scent. Now, your hedgehog will spit this frothy ball over the spines. Most likely, this is a strategy to camouflage themselves by using a strange new smell. Don’t be surprised, it’s a completely normal thing for them to do.

Obesity is a common disease among pet hedgehogs. It’s definitely not something ‘cute’, as said, it’s an actual disease. Obese hedgehogs can experience many different health complications simply due to having put on too much weight. That’s why it’s mandatory to have an exercise wheel in the cage. In addition to roaming around the cage, they are able to use the wheel for some extra calorie-burning activities.

When they are in the wild, cycles of heat and cold run their lives. When it gets cold, they start to hibernate. Similarly, in very hot weather, they’ll reduce their active time and sleep much more compared to normal daily life. These patterns shouldn’t be exhibited by pet hedgehogs. You need to provide a constant temperature. Otherwise, your hedgie could start hibernating. This process can be deadly for pet hedgehogs. Therefore, if your spiky pet starts acting strange and very lethargic, then it’s time to visit the vet as soon as possible.

You need to digest all of the new information regarding pet hedgehogs that you just learned. If you accept the peculiarities of having hedgehogs as pets, then you are ready to go. Just don’t forget to read even more about them before committing to having one. Since hedgehogs are considered exotic pets, it’s very important to know about all the small details that could make a huge difference in their quality of life. Also, remember that they don’t need as much maintenance as dogs, for example. But they do have unique requirements, such as a constant ambient temperature, that can’t be neglected under any circumstances.