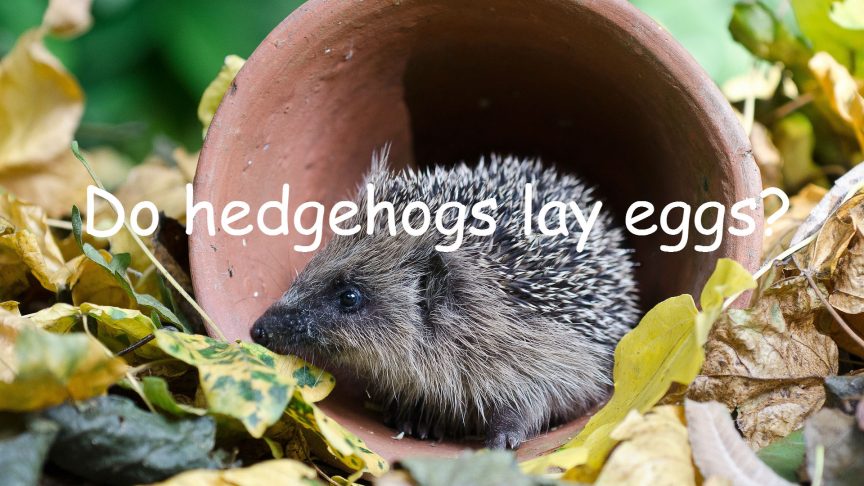 Hedgehogs have become sweethearts to many due to their cute appearance and general beauty appeal. A lot of people have opted to keep them as pets. But some of them find that they knew very little about hedgehogs. It was important to ask some questions before deciding to adopt a hedgehog or any other pet at all. Apart from the conventional questions about their diet and behaviors … There is also the very important question of what their reproduction is like.

Do hedgehogs have live babies or do they lay eggs? Do they have live underdeveloped babies who complete their fetal growth outside their bodies?

All these questions will help you make your decision when it comes to making up your mind.

The simple straightforward and succinct answer to the question of whether hedgehogs lay eggs is ” no”. Hedgehogs do not lay eggs. Hedgehogs are mammals. But not even mammals like marsupials. They are full mammals who have live births.

Now there is a hedgehog look-alike who lays eggs. Trust me, these animals are almost indistinguishable.

for a hedgehog, if you aren’t familiar enough with both of them.

We refer to this animal as echidna.

What is an echidna?

Spiny anteaters, another name for an echidna. This is due to the fact that they also bear a strong resemblance to anteaters because of their facial structure. These animals are me of the last breeds of mammals on earth who still lay eggs.

On the outside, they appear like the anteaters of South America and other spiny mammals such as hedgehogs and porcupines. They are usually black or brown in color. There have been several reports of albino echidnas though. These albino sport pink eyes and white spines.

The echidna has elongated and slender snouts that function as both mouth and nose. Much like the platypus, they have electrosensors. But, while the platypus has 40,000 electroreceptors on its bill, the long-beaked echidna has only 2,000 electroreceptors. Whereas, the short-beaked echidna, which lives in a drier environment, has only about 400 electrosensors, located at the tip of its snout.

Echidnas have very short, strong limbs with large claws, and because of this are powerful diggers. The claws on their hind limbs have elongation and backward curliness to help in digging. The echidna feeds by tearing open soft logs, anthills and the like, and using its long, sticky tongue, which protrudes from its snout, to collect prey. The ears are like slits on the sides of their heads that are unseen, this is because they are covered by their spines.

Similarities and differences between hedgehogs and echidnas

The biggest similarity between the hedgehog and the echidna is their spines. They are related in a few other ways. Echidnas are monotremes, and hedgehogs are placental mammals. Hedgehogs are omnivores, eating just right about anything at all while echidnas are insectivores: feeding on insects, bugs, and worms.

Hedgehogs can have multiple babies at once while echidnas only lay one fertilized soft shelled egg at a time.

Marsupials: animals who give birth to live babies who aren’t fully developed when they’re born. These animals have babies that need to complete their fetal cycle outside of their mother’s bodies in holes, holes called pouches.

Marsupials have pouches that they use to house their babies after they are born while they continue to mature and develop. This is a major difference. “Placental” mammals, another name you can refer hedgehogs too as. Their babies are born looking like mini hedgehogs and are pretty much developed. All the development that they need to do is normal young ling development.

How does echidna reproduce

They birth in ones and the reproductive drives usually involve the other laying a single egg in her pouch. This egg has a soft shell and seems leathery to the touch. The average echidna egg weighs About 1.5 to 2 gram and is about 14 I’m in length.

After gestation, the echidna egg stays in the pouch for about 10 days before it hatches into a little echidna.

The baby echidna sports an egg tooth that is reptile.like and this is what it uses to hatch the egg from inside. The baby echidna, though hatched is not ready for the world still, and would still require the protection of the couch for a while after. It is still technically a fetus or larvae depending on how one chooses to look at it. It gains nutrition by sticking the pores of the two milk patches on its mother. An echidna is a monotreme and monotremes, even though they are also mammals and feed their baby milk, have no nipples.

After the egg hatches, this hedgehog look alike remains in the pouch for about 45 to 55 days. By the 55th day, the little puggle starts to grow its very own spine. This is the point where the mother decides that her baby is finally ready for the world and this she digs a nursery I’m the floor and places her little one in it. After this, she returns every five days to nurse her puggle.

A baby echidna is not weaned off of breast milk until.it is about seven months. And they will stay in the nursery or their others den for a minimum of one year.

If hedgehogs do not lay eggs, how do they reproduce?

The Best way to answer this question is to just give a full explanation of how hedgehogs reproduce. Hedgehogs males usually do a dance around the female for hours before mating takes place. The female would react very violently and viciously to the male at first. This violence is exhibited in the way she raises her spines dangerously, this will cause the male to get severely injured if he tries to mate her at such a time. Eventually, she would permit him to mate her and she would be pregnant. It is at this point that the countdown begins.

Hedgehogs have a gestation period of about 35 days, the hedgehog mom would put to bed a litter of about 4 to 5 hoglets who are deaf and blind at birth. They are born completely formed and ready to nurse immediately. There is usually no need for special care and the hoglets are mature enough to eat solids at two to three weeks old. They get kicked out of the nest and they can now fend for themselves.

Hedgehogs are mammals through and through. They are called placental mammals because their babies are born completely developed and ready to face the world. This means that their eggs are fertilized inside their bodies, develops inside these same bodies and are only born at maturity. There is no need for pouches or anything of the sort.

Echidnas, however, lay their egg after fertilization and this egg goes on to hatch outside of their bodies in the pouches. The echidna puggle then goes on to live in this pouch for a while before it is able to move around on its own. This means that the gestation to the maturity time frame of the hedgehog is so much shorter and less arduous than that of the echidna.

Echidnas might bear certain similarities to hedgehogs but they are not the same. They are not even biologically related. Hedgehogs do not lay eggs… Echidnas do.