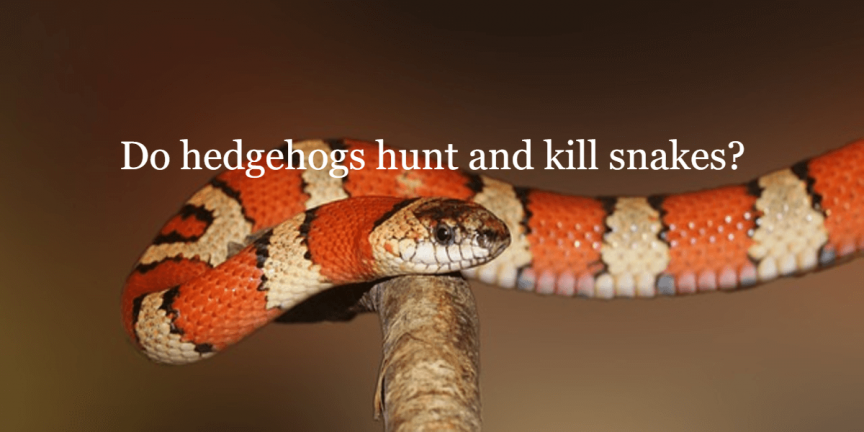 Hedgehogs have many natural enemies. The wilderness is a ruthless place and hedgehogs aren’t big like lions or strong as elephants. But due to their quills, they can protect themselves from a variety of animals. However, hedgehogs aren’t eating only plants. Online videos show hedgehogs attacking even snakes. Is that really possible? In this article, you’ll learn all about hedgehogs, snakes, and the struggle for survival.

Yes, in the wild, snakes form part of their diet for many types of hedgehogs. Especially vipers. This means that hedgehogs hunt in the night for snakes and kill them for food. Scientists discovered that certain hedgehogs are immune against particular snakes’ venom.

What’s the relationship between hedgehogs and snakes?

More people take an interest in the relationship between hedgehogs and snakes. That’s because there are more videos online showing hedgehogs attacking snakes. One of the most popular videos on YouTube is Discovery Channel’s upload titled “Cute But Vicious Hedgehog Attacks A Deadly Viper”. This video with 2M+ views focuses on long-eared hedgehogs. The narrator calls these hedgehogs ‘surprisingly vicious’ animals that eat ‘anything in their path when hungry’.

Although, some people claim the video was staged, it’s no secret that hedgehogs can attack snakes. And that is completely true. Even many popular science books explaining hedgehogs state that snakes form a part of their diet.

How do hedgehogs hunt and kill snakes?

For many people, it’s very hard to imagine a small creature like a hedgehog to hunt for snakes. Still, that’s a part of the reality in the wild. Hedgehogs are nocturnal animals, which means that they conduct all the foraging at night. Almost all the encounters between snakes and hedgehogs take place after the nightfall.

Vipers are the most known casualties. Basically, a hedgehog defends itself with its armor of quills. The hedgehog irritates the viper, making the snakes blindly lunge towards the opponent. Each time, the viper acquires wounds from attacking the hedgehog that has curled up into a ball. At some point, the snake has too many wounds. They can’t properly attack anymore.

And this is exactly the moment when the hedgehog can make its next move. They bite the snake from its neck a few times. The final blow strikes the snakes when its vertebrae is completely crushed. Hedgehogs eat the snake’s head first. The whole meal can continue for several hours because their teeth are more accustomed to insects and smaller animals. One hedgehog won’t consume the entire snake.

Are hedgehogs immune against snake venom?

That popular video on YouTube claims that any wrong move would have killed the hedgehog. That’s because the snake carries lethal venom. However, there is some evidence that hedgehogs could carry certain activity in their bodies, which helps to counter the effects of snake venom.

Namely, scientists found that European hedgehog’s plasma contains factors that neutralize the hemorrhagic activity of the European viper. When they purified these compounds, researchers discovered that these macroglobulins entirely neutralized the venom’s hemorrhagic effect. In other words, the venom of this viper contains compounds that cause profuse bleeding in anyone coming into contact with it. But European hedgehogs seem to have certain antibodies against these dangerous compounds.

Is there any more evidence supporting this?

There isn’t a lot of research put into the topic of snake venom and hedgehogs. Some scientists claim that hedgehogs are only partially immune to the venom. When the snake strikes in certain spots, the hedgehog may still die after a few hours following the bite. This is where individual factors play a role as well. Some hedgehogs may just see a swelling, others can succumb to the bite.

There have even been descriptions of snake and hedgehog stand-off where ultimately both sides die. In the 1800s, some scientists made questionable research. This covered injecting snake venom into different animals and seeing whether they would live or not. One of the things that we learned from this completely unethical science was that it takes 35-40 times more of adder venom to kill a hedgehog compared to a guinea pig.

But who are hunting and killing hedgehogs?

Apparently, not the snakes, right? Well, hedgehogs are tiny creatures compared to many animals out in the wild. They make easy prey because of their diminutive size. That said, hedgies have an important secret weapon. It’s their quills together with powerful back muscles controlling these sharp defense mechanisms. Even with this in-store, hedgehogs can face life-threatening situations.

Another set of predators are owls and hawks. Owls have a special taste for hedgehogs. Sometimes, it’s quite easy for them to catch hedgehogs. That’s because their flapping wings don’t make too much sound. A wandering hedgehog stands no chance of escaping this quiet flying predator. Plus, they are nocturnal, just like hedgehogs. When you put these facts together, you’ll see why owls prey on hedgehogs quite often.

Yes, all sorts of canines can attack and even eat hedgehogs. This is especially true for wild dogs. There are documented cases of wild dogs finding ways to release hedgehogs from their defensive position. They find a weak spot and push their nose in that place. As a result, the hedgehog releases itself from the original defense position. After this, the wild dog can eat the exposed hedgehog.

Now you may wonder about domestic dogs. When you have any hedgehogs visiting your garden, you could worry about the neighbor’s dog. Isn’t he a bit too curious and aggressive? Naturally, there is no straight answer to this. Some dogs could even turn out to be friendly with a garden hedgehog. Others may viciously attack the hedgehog, which may result in serious injuries or death.

Therefore, any dog can attack a hedgehog. But whether the particular dog does this, ultimately, depends on their character. Experts proposed another potential variable to the equation as well. Hunger could raise the risk of a dog attacking hedgehogs or any other small animals in your home or yard.

Besides snakes, what else do wild hedgehogs eat?

Although, snakes may form a part of a hedgehog’s diet, they surely aren’t the staple. Instead, hedgehogs forage for numerous foodstuffs during the nighttime. The particular foods depend on what they can get on a given night. Here is a list of the most common food items on a wild hedgehog’s menu.

Keep in mind that wild hedgehogs are different from their domestic counterparts. You shouldn’t follow this list as guidance for feeding your pet hedgehog.

The bottom line: do hedgehogs hunt and kill snakes?

Yes, hedgehogs may hunt and kill snakes. The most well-documented cases surround wild hedgehogs and vipers. Hedgehogs use a smart strategy to wound the viper until they can more safely administer the fatal bite.

However, snakes aren’t the staple of hedgehogs’ diet. They are opportunistic eaters. Most of the time, there are other small animals, berries, and potential food items on their way.

Even though hedgehogs may have partial immunity to viper venom, they can still die or experience health complications from this venom.