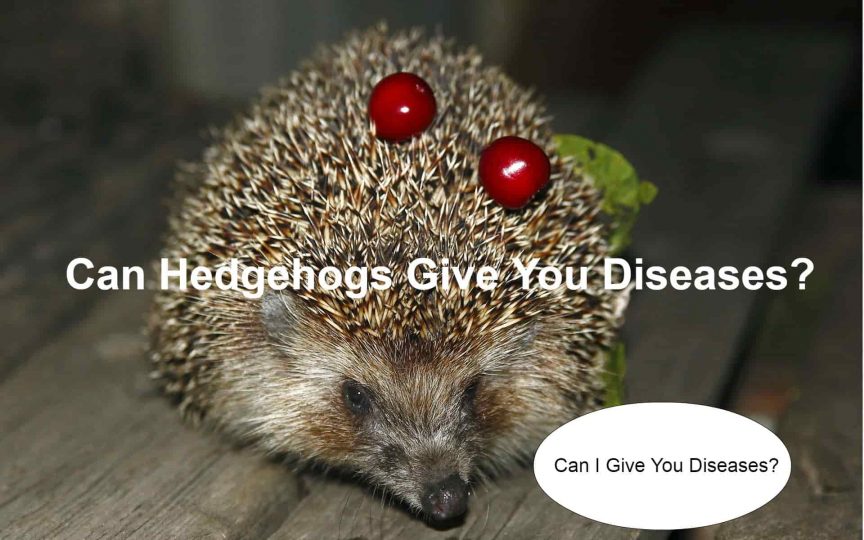 Nowadays, there’s more and more talk about zoonoses. These are diseases that animals can give to humans. In this post, we’ll give you a neutral overview of the most common questions and answers regarding hedgehogs and the possible diseases they can transmit to people.

Can hedgehogs give you diseases?

Yes, hedgehogs can give you diseases! The most common diseases include salmonellosis and ringworm. Don’t worry about mites, though. The ones affecting hedgehogs aren’t usually interested in humans or other animals.

Why is this topic so important right now?

People talk about diseases and hedgehogs because the spiky creatures are becoming a more popular pet choice. Hence, it raises concerns that some human illnesses might stem from ‘prickly sources’. For example, some hedgehog breeders say their waiting lists have reached all-time records. Internet popular culture is helping the ‘hedgehogs as pets’ cause as well.

It’s not the hedgehogs’ fault. One of the concerns is focused on our own knowledge gaps about hedgies and the diseases they could give us. Compared to cats and dogs, we have much less collective experience regarding hedgehogs. For example, we are just in the middle of getting more information about which diseases transmit from hedgehogs to humans and how we could best protect ourselves from these medical dangers.

How to stay on the safe side?

The main piece of advice is simple: always wash your hands after every time handling your hedgehog! You might perceive it as common sense. But many people forget about the hand-washing rules after cuddling with their prickly best buddy. All of that cuteness could easily override the hygiene program implanted in our brains by our parents during our childhood.

Some doctors advise against having hedgehogs in homes housing small children or people with compromised immune systems. Both immunocompromised people (often old people) and little kids are more susceptible to threats originating from their surrounding environments.

But my hedgehog isn’t sick. I shouldn’t be worried!

Actually, your hedgehog doesn’t have to show any sign of disease to carry something that could make you sick. They could be silent carriers. For example, they could host a lot of microorganisms that don’t affect them. But our immune systems would go crazy upon discovering these organisms from inside our bodies.

What kind of diseases can hedgehogs give you?

The most common diseases transmitted from hedgehogs to people are Salmonellosis and Dermatophytosis. In rare cases, they can transmit Mycobacteriosis as well, especially if there are former fish tanks or aquariums used as their habitat. Additionally, hedgehogs could carry a host of viruses or some protozoa. But it’s harder to make sure the latter two came from a certain hedgehog in cases of human infections. Viruses could easily have an asymptomatic period. And by the time the person gets to the doctor, the formerly infectious hedgehog could have already cleared out the virus or other intruding microorganisms.

The main disease associated with hedgehogs is salmonellosis. This is a similar phenomenon compared to quite a few other exotic pets, including various types of snakes and lizards. At least a quarter of hedgehogs may carry dangerous strains of Salmonella without displaying any symptoms whatsoever. But when they do show signs of Salmonella trouble, the symptoms include diarrhea, failure to eat properly, and significant weight loss.

It’s important to know direct contact isn’t always needed to contract salmonellosis. If your hedgie’s stools contain any Salmonella, then the bacteria can end up indirectly in one of your family member’s bodily system. For example, babies tend to lick and touch foreign objects and surfaces. Still, you are able to take quite a few safety precautions.

Always wash your hands after handling your pets. It’s especially important when you might have had contact with their stools. Also, keep an eye out before or after handling any food products. Furthermore, immediately get veterinary attention after discovering that your hedgehog might be sick. The sooner they get better, lower the risk of you or any family members contracting the disease.

Salmonellosis carries a set of typical symptoms, including diarrhea, fever, headache, nausea, and cramps in your stomach. In most cases, the infection resolves itself in a matter of a few days. Your immune system takes care of all the invading bacteria. Just drink plenty of fluids and in the case of severe diarrhea, try using some special rehydration products. However, small children, elderly people, or those with weakened immune systems should see a doctor when they are dehydrated, experience a high fever, or there’s any blood in the stools.

Ringworm is scientifically known as dermatophytosis and it could easily affect your hedgehog. The lesions create skin dryness along with balding, scaly patches and quill loss. The latter can be quite severe in some cases. This is not a disease unique in any way only to hedgehogs. There are many other animals that could be affected by ringworm.

The link between hedgehogs giving ringworm to humans exists. Quite a few medical journals describe the transfer of the dermatophytes to people. For example, someone handled a hedgehog in the pet store for not more than two minutes. This exposure time was enough to give the person the ringworm. Another one got a pretty bad case of ringworm. The timeline is pretty straightforward. The first symptoms appeared after one week from purchasing an African Pygmy Hedgehog.

Sometimes the ringworm can be quite hard to treat. One of the medical histories includes someone that handles a lot of European hedgehogs. At first, the doctors gave her a light treatment relying only on topical antifungals. She was pregnant. But after a month, her nails on all fingers had been destroyed. The infection finally subsided after eight weeks of systemic treatment.

When you get a ringworm infection, you are basically dealing with a certain type of fungi. You’ll see red patches that could resemble a ring. When the patches are on the scalp, balding may occur as well. Sometimes these patches start to blister or ooze. When the ringworm infection affects areas near your nails, the latter might start to get thicker, change their color, or even begin forming cracks.

Usually, your doctor will prescribe topical antifungal agents, including ketoconazole, terbinafine, and miconazole. But some cases might be more difficult than others. In these cases, you’ll get a systemic treatment instead. The treatment usually lasts for a few weeks. The particular duration depends on how the patient reacts to the given medicine. It’s important to prevent touching the lesions in order not to spread the infection. Also, maintaining great hygiene is essential in keeping others from getting the disease as well.

Scientific journals describe that hedgehogs have carried the bacteria called Mycobacterium marinum. But they are not typical carriers of this infectious bacteria. Instead, they could get it when they live in a house with fish tanks. The same organisms infect humans by causing a disease called fish-tank granuloma. While it’s something to watch out for, Mycobacterium probably isn’t among the most acute zoonotic dangers from hedgehogs.

There are numerous cases of different viruses found that infect hedgehogs. Many of these viruses have the potential to infect humans as well. But this can happen vice-versa. For example, a medical journal describes a case of an African Pygmy Hedgehog at the veterinarian. Unfortunately, the hedgehog died and they checked all the organs after the death. They found a human herpes simplex virus inside the liver. The exact transmission details aren’t completely clear. Although, the owner said that some of the family members suffer from cold sores. That could be the key!

So far, there’s not a lot of evidence about hedgehogs transmitting viruses and protozoa to humans. Even if there are cases, then usually it’s hard to tell whether the source was the pet hedgehog or one of the other potential sources of the countless variety. In any case, keeping good hygiene and not handling your hedgehog while you are sick are always the best options.

Can I get mites from my hedgehog?

Not really! Some people worry that they might catch mites from their hedgies. Actually, these mites love the hedgehog skin. They aren’t really interested in our hair or skin, which means migrating to human body surfaces is highly unlikely. Still, that doesn’t mean you shouldn’t seek treatment for your hedgehog. A long bout of mites could result in more serious medical problems for your hedgehog.

The bottom line: can hedgehogs give you diseases?

All pets have the potential to give you diseases, including hedgehogs and other exotic pets. The difference between regular pets and exotic ones is simple. We just know much less about the exotic pets and the zoonotic diseases they could carry. So far, it’s clear that you could get Salmonellosis and Dermatophytosis from hedgehogs. The best prevention is to wash your hands each time after handling your hedgehog and their cage, food, or droppings.