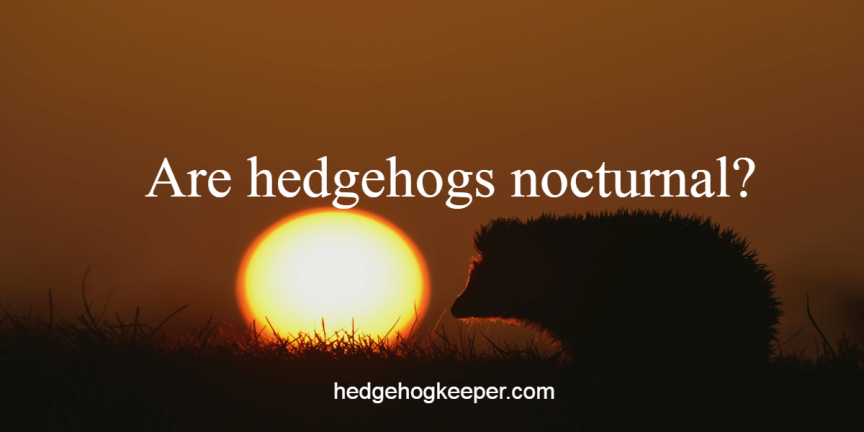 Hedgehogs make for great companions. But since you may want to maximize your time spent together with your prickly buddy, you could be wondering whether they are nocturnal. It’s said that people might find it tougher to have a pet who doesn’t appreciate the daylight and only starts to live it up as the nightfall comes. In this article, we’ll guide you through everything you might want to know about hedgehogs as nocturnal animals. Also, you’ll learn a thing or two about their general activity levels being tied to particular times of the day.

So, are hedgehogs nocturnal?

Yes, hedgehogs are nocturnal animals. In other words, they are active at night and rest during the daytime. However, sometimes they show traits that are defined as crepuscular. This term is reserved for animals who are awake during late evenings and early mornings. But these are exceptions. Generally, hedgehogs are nocturnal as their most active time coincides with our typical sleeping times.

I read somewhere that they aren’t diurnal. What is this?

Scientists have created three classes of animal activity and behavior based on the particular times of the day. Take a look at their definitions:

So, when people say that hedgehogs aren’t diurnal, it’s just another way to put that they are nocturnal. Also, there are cases when hedgehogs show significant crepuscular activity. But this is not a reason to get lost in definitions. Overall, you could say that they are active during the night with a potential for extending over the transition time periods.

How are they adapted for the night?

Being nocturnal signals unique adaptations for the dark time. Many biologists have the opinion that hedgehog senses are fine-tuned for night activities. Their body starts sending signals for becoming more active when the light levels are very low or completely off. And that’s where things get interesting.

Namely, hedgies’ activity levels won’t depend on the time of the day. Instead, they become active when there’s less light available in their surrounding environment. Since hedgehogs have weak eyesight, the other senses compensate for this sensory restriction.

And here’s an important clue for good pet keeping rules. NEVER keep your hedgehog in a dark place. No dark closets, rooms, or other spaces that lack the cycles of day and night. They need the natural, regular change of light for maintaining the circadian rhythm.

Why are they nocturnal?

We need to trace their roots to answer this question. For example, unlike dogs, hedgehogs haven’t gotten used to our daily rhythms that much. We have had much less contact as cohabiting animals. This is why hedgehogs will act deep down as though they are still in the wild.

When they live in the open nature, hedgehogs use the nighttime for foraging. This is not an easy task. Every night, they cover a lot of ground. Some research has shown that they can easily do over five or six miles each night. And that’s quite a feat for small animals like hedgehogs.

As the dusk falls, hedgehogs come out of their hiding places in the wild. Of course, in the darkness, they do have their enemies who could kill and eat them. Still, it might be safer for them to carry out all the food hunting during the night.

What should I know about circadian rhythms?

As a hedgehog owner, it’s important to understand the concept of circadian rhythms. How come? Well, this bodily phenomenon is important for eating and sleeping patterns. And this goes for all animals, including hedgehogs and humans. So many of our physical functions tie to these patterns. Brain waves, core temperature, and hormone production just to name a few.

Animals follow these natural cycles more closely compared to humans. That’s why you should understand that your hedgies will start to make some noise when it gets dark in the night. And it’s completely normal. You should never start to manipulate with the light and dark cycles just for your own enjoyment. For example, trying to create more darkness during the daytime. That’s unhealthy for your hedgies.

Even with humans, we know that issues with circadian rhythms may increase the risk of many diseases. Shift workers have shown to carry a higher risk of cancer, for example. We are just beginning to understand the complex role of circadian rhythms in animals. This is exactly why you should consider the nocturnal nature before getting a hedgehog. In the same way, you have to respect this part of their nature when you already have a hedgie at home.

Nocturnal means no handling during the daytime?

Definitely not! Otherwise, hedgehogs would be a highly impractical pet choice for a lot of owners. You can easily handle them during the day. It’s just important to give them enough time for full awakening. It’s so similar to humans. If you were woken up in the middle of the night, wouldn’t you feel sluggish and grumpy as well?

As you can see, it’s vital to give your hedgehog enough time to gradually wake up. Don’t expect any quick positive responses after waking your buddy up during the day. But be kind and slowly adjust them to a schedule of daytime handling. Additionally, expect them to fall asleep right after you put them back in the cage.

How can I make daytime handling easier for hedgies?

Creating these gradual patterns is important. Some owners may not even realize that they force something highly unnatural on their hedgie pets. While they may get used to them, it’s vital to understand that these can never become ‘a second nature’ for hedgies. At least, that’s true until we accept that night shift work is something that becomes ‘natural’ to us, humans.

Plus, we have almost no scientific data on how pet hedgehogs are affected by circadian rhythm changes. That’s why not handling them during the day isn’t obviously the case. We still need to do this. But let’s do it with a kind, reflective, and patient approach.

How much time can I spend with my hedgie during the daytime?

This is a question that doesn’t have a blanket answer. Every hedgehog is unique. They have their own physical and mental differences from the others. You may find that your hedgehog is fine with only 20-30 minutes of playtime. Other owners may go on for a few hours without getting their hedgie stressed or tired.

The smartest approach is to look out for key signs that they want to resume the nap. Here’s a handy list of typical reactions and behaviors.

If you see these signs or note anything else signaling distress, it’s time to let your hedgie have his well-earned rest. While playing and running around is important, solid sleep serves vital functions in hedgies as well.

I am awake during the night. Hedgehogs must be perfect for me?

Not necessarily. As we have outlined before, hedgehogs depend on the natural light cycles, not the actual time of the day. When you are awake at night time with all the lights on, you’ll discover that your hedgie will sleep quite a lot. All that light translates into no nighttime alertness and activities.

Do hoglets have it different?

True, baby hedgehogs might differ in their activity levels. After experiencing any stress, they tend to sleep quite a lot. For example, changing homes is indeed great stress for any hedgehog. In turn, they might sleep more than usual.

And here is another crossover between us and other animals. Human and hedgehog babies both need more sleep than adults. When little hoglets get older, it’s likely that they will start sleeping less.

Maybe my hedgehog is just lazy!?

Some hedgehog owners have come to the conclusion that their hedgie is lazy. When you see them sleeping all the time, then it’s quite natural to form this opinion. There are even regular cases of people taking the prickly family members to the vet because they think it’s a sign of some illness.

But daytime sleepiness isn’t a sign of laziness. Once again, it just shows that your hedgehog is nocturnal. This is not a disease. However, if you suspect that your hedgehog is in apathy all the time and doesn’t move that much, then this is a concern. Inactivity throughout a 24-hour period should raise concern. In this case, you should take your hedgie for a medical checkup.

What if my hedgie is naturally awake during the day?

This is possible. Online, many owners report daytime activeness without any intervention from themselves. Hoglets seem to be the usual culprits, in this case. They might be acclimatizing to the new cage. Also, getting detached from their siblings might raise their stress hormone levels. These bodily changes result in daytime alertness.

Of course, at this point, you might wonder whether it’s a medical issue. It always pays to be safe than sorry. But before taking them to the vet, there are a couple of things you can check by yourself. Answer the following questions to assess the situation.

If you see that nothing has changed, then it’s likely to be a natural choice. You really can’t do anything about this. But whenever these changes are together with other irregularities, it’s time to investigate the matter. There might be an underlying medical reason that needs attention and treatment.

The bottom line: are hedgehogs nocturnal?

Yes, your pet hedgehog (and any one of them in the wild) is nocturnal. Their activity levels depend on the available light, not on the particular time of the day. It’s important that you keep them exposed to a natural light cycle. Anything else is dangerous.

While they are nocturnal pets, you can still handle them during the day. Just keep it nice and gradual. Whenever you see the hedgie getting tired and stressed, it’s time to put them back in the cage.