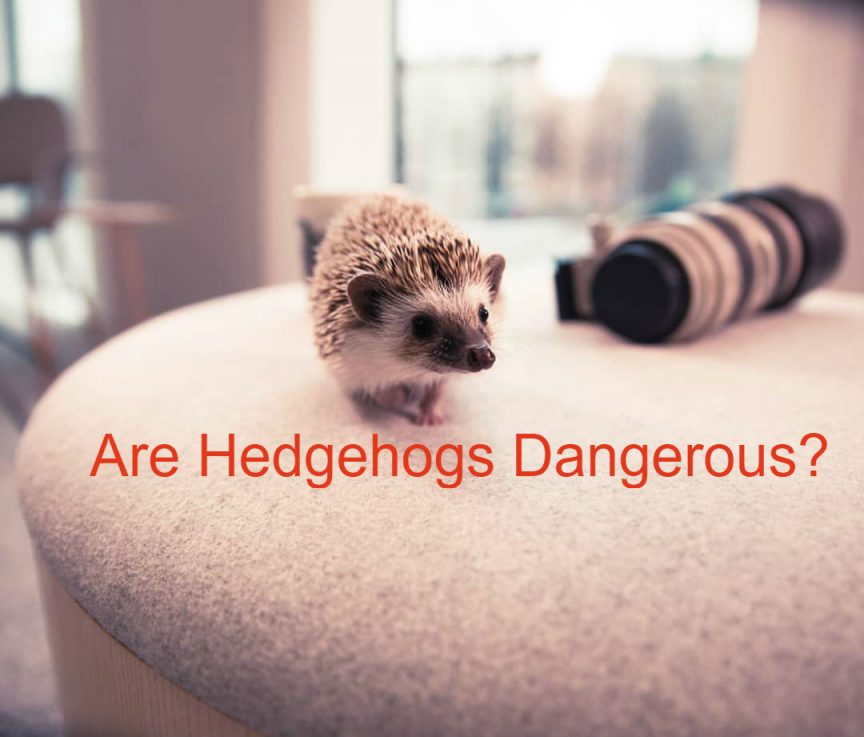 Briefly About Hedgehogs and Humans

Until recently, hedgehogs used to be wild animals. This was not because they were likely to be dangerous like lions or snakes. However, it was more because of the fact that people didn’t understand them enough yet or had not really developed the interest in breeding them in captivity for as pets.

Today, hedgehogs have taken over the hearts of a lot of people. And there’s a genuine love for them. Because of this, even groups and associations of humans that come together to discuss the care and welfare of hedgehogs exist.

However, a question continues to raise its head amongst people who do not have first-hand knowledge about the hedgehog. Also, these are people who are looking to adopt pet hedgehogs or who just wish to know more about them. Are hedgehogs dangerous to humans?

The answer to this question is neither yes nor no. This is because while hedgehogs are generally not dangerous animals and do not have the same ranking with dogs in terms of their potential for danger to any human. Furthermore, there are definitely certain circumstances that can make the hedgehog dangerous or even lethal to humans.

What you need to know about Hedgehogs as pets

First of all, there is a dire need to understand that hedgehogs are not suited to homes the way other pets such as bunnies or dogs and cats are. Also, they are small and should not roam around houses, greeting guests or eating from coming utensils with families.

So, there is the little issue of the fact that they have these prickly spines on them. To an adult human, the spines are prickly but generally harmless. But in the hands of a child, those spines can become almost weapon grade. Also, they could puncture the delicate skin of children and cause bleeding. Now, seeing as children can be rather rough in handling pets, a child could harm himself by handling a hedgehog, or he could harm the hedgehog. Either way, in the hands of a child, a hedgehog is not a safe object.

Another factor that could potentially make the hedgehog a dangerous animal is a fact that it carries and transfer germs. In truth, some of these germs are relatively harmless, but then, there are others with almost poison grade lethality. For example, one of such germs is Salmonella.

Salmonella is a strain of bacteria that can invade the gastrointestinal tract of humans and cause typhoid fever. And it could cause a hypovolemic and septic shock leading to a serious and life-threatening situation. Young children are at a stage where their immune systems are just developing. Consequently, they are more easily affected by germs because a lot of children under the age of five are more likely to such their thumbs, put their hands in their mouths or eyes, maybe even put food in their mouths with their unwashed hands. Also, they are more likely to succumb to bacterial infections as a result.

How else can one get salmonella?

However, it is that animals like hamsters, lizards, turtles, and other reptiles also transmit salmonella. So, it would be rather unfair to single out hedgehog as a single source of salmonella as all of these other animals are also in as much as four million American homes. Thus, this germ and the resultant infections manifest in the form of severe diarrhoea, fever and stomach cramps. They can lead to hospital admission, and in places like sub-Saharan Africa, they have to lead to typhoid and also death. Because of this, it is highly advised that parents keep their little children under the age of five away from not just Hedgehog but exotic pet animals generally. And if suspicion of salmonella arises, immediately parents and guardians should take their children and wards to the hospital prevent death.

How does salmonella attack humans?

Salmonella can be found in the saliva and digestive tracts of humans and animals, especially reptiles. Excretes and body fluids are where salmonella are usually detectable. Additionally, salmonella on the skin of reptiles or amphibians can infect people who handle the animals. Also, what makes this bacterial especially dangerous is the fact that food and water can also become contaminated with it, if and when they come in contact with the faeces of infected people or animals.

How to prevent infection by my Hedgehog

To begin with, when there is a salmonella outbreak, one of the fastest way to get rid of it apart from antibiotics treatment is to maintain as top-notch hygiene as possible. Hands should be properly washed before and after food, on each visit to the toilet and each time one handles the animals. Also, an infected person can infect many more through contact with their vomit or excretes. Because of this, all such discharges from the body should be well cleaned up and immediately disposed of far away from food and water sources as the bacteria have been known to survive the harshest conditions. Bathing your hedgehog will not help. It will rather inconvenient them and make them cranky. It is best to just wash hands before and after handling.

Thirdly, hedgehogs have been known to bite. For some, it is rare. But for some others, it is pretty common. Smaller and exotic pets have been proven to be more likely to bite, scratch or even claw than cats and dogs so hedgehogs are not alone in this and should not be discriminated against based on this. It is important to know that children are especially more likely to be bitten. This can happen more often during handling or playtime. Because hedgehogs decide what to eat or what is safe through their nose, they have certain smells that appeal to them specially and some that do not. One of such scents is the smell of salt. During handling, a sweaty person might get bitten because the hedgehog thinks that they are food. This love for salty taste is the most common reason hedgehogs bite, but there are others such as:

A sick hedgehog is very likely to be irritable. Handling might not be pleasant at such a time and their response to it could be biting.

Hedgehogs, especially the young ones often nibble, tug on, carry around or simply bite because it is their own means of exploring their environment and getting familiar with new smells, tastes, and textures. This Sort of behavior is also common to

Human. Some things that could fascinate little hedgies include fake nails, rings, hand creams or perfumes or just the smell of cigarettes. How to stop the biting? You don’t. Hedgehogs need to develop all their senses just like human babies too. If they hurt you, you can put them back in their cages or away from you.

Some hedgehogs, there is no real reason they bite. They just like to chew on things. However, this is not a necessarily harmful or destructive behaviour especially if they are in their own cages most of the time. To help them, you can just provide something for the hedgehog to chew on. A piece of cloth, a piece of wood… anything really.

Hedgehogs can’t bark, whine, bleat or talk. The best they can do is squeal. But, don’t be fooled, hedgehogs’ silence doesn’t mean that they don’t have their own opinion. Or that they would hesitate to let you know that they’re unhappy. Their means of communication is biting.

Hedgehog can become upset with the change, and biting is their only way to express their frustration. Other hedgehogs do not like being too close to people or restrained by them. For some, it is simply noise that irritates them and others may just have learned to bite to get their way. In mom hedgehogs, is their way of telling you to stay away from their litter. This might not even be in their nature but their maternal instinct would kick in and they would become chronic biters. Often, they would return to their original nature when the weaning is done.

Even though hedgehogs are very cute and lovable, they infect humans with various fungal and bacterial skin infections. One of such infections is the one called ringworm caused by Trichophyton erinacei.

According to the Center for Disease Control and Prevention, hedgehogs can transfer bacterial and fungal infections through contact, biting or just piecing humans with their quills. One can never be sure that they are handling a bacterial free hedgehog or that their immune system is strong enough to withstand the pressures that such infections would put on them.

In the end, the answer to the question of whether hedgehogs are dangerous or not really depends on who is handling them, and under what circumstances. Even chickens can be dangerous under certain conditions. And lions have been known to protect humans.