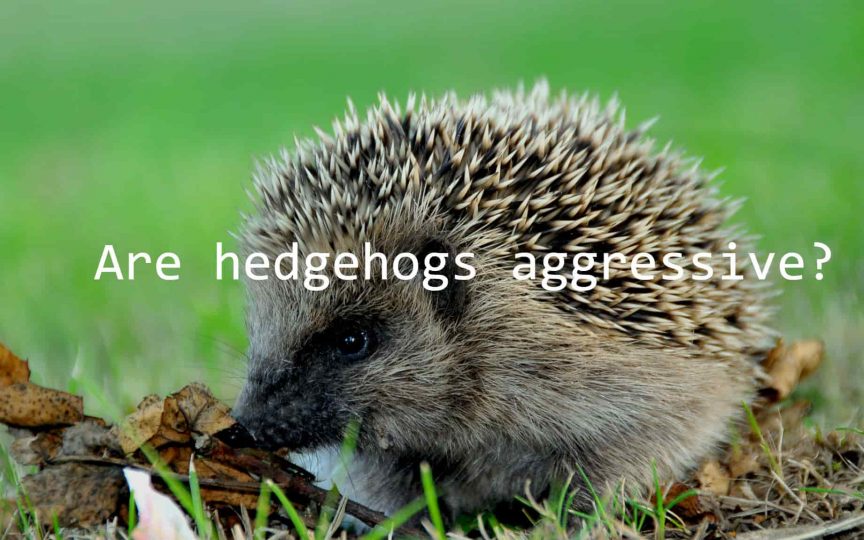 Biting, hissing, and curling into a ball of sharp quills: some aspects of hedgehog behavior feels really aggressive. Actually, most hedgehogs that mean. They do have their defense mechanisms and individual moods. In this blog post, you’ll learn all about the perceived and actual aggressiveness of hedgehogs. After reading this, you’ll have an upper hand at understanding your hedgie’s behavior and the reasons why some hedgehogs might turn more aggressive than others.

Most hedgehogs are not aggressive creatures. Some aspects of their behavior get interpreted as aggressive by people who don’t know the context of biting or hissing. Actually, a lion’s share of the “aggressiveness” is just communication because hedgehog’s don’t vocalize or verbalize their wants and needs. There’s a small chance of hedgehog being a biter, but even then it could be just hormones or territoriality instead of a vicious mind.

This is the short answer. Now, we’ll go over all the details concerning hedgehogs and their aggressive behavior. As you can see, it’s not always clear whether your hedgehog is being angry and wants to attack someone or they are just being afraid. There’s even a saying that people are never angry. Deep inside, they are just afraid of something. Maybe the same goes for hedgehogs in many cases.

How does an aggressive hedgehog act?

That is a very important question. There is no official guideline or rule that defines the behavior of an aggressive hedgehog. In reality, it’s up to the people to define it in every single situation. Some people feel that a hedgehog is aggressive when it’s curled up into a ball with all its spikes facing outwards. Others understand that it’s a natural reaction against predators and don’t interpret as aggression. One of the things that’s universally interpreted as aggressive is biting. Of course, biting is a direct aggression against another animal. It doesn’t really matter whether it’s another hedgehog or a human. But are all bites an act of aggression? Let’s see…

Why do hedgehogs bite?

Biting isn’t only a way to let out the inner feelings of aggression. For example, hedgehogs may bite because they are exploring the surrounding area or try to communicate with someone. In this case, people might inadvertently perceive the bite as aggression, whereas the hedgehog might actually want to say something. Now, we’ll go over the main reasons why hedgehogs bite.

Hedgehogs lack the complicated language skills people have. But that doesn’t mean they won’t have feelings about all sorts of stuff. Biting is a way of communicating. But how could you understand the language of bites? Always try to see the wider context. For example, imagine you are cuddling with your hedgehog and you press a little harder against their stomach. This is followed by a bite. When you don’t think about the context, you could easily perceive it as random aggression. Oh, she bit me! Why so angry? In reality, the hedgehog tried to communicate that you were making her uncomfortable. Remember, hedgehogs can’t vocalize expressions that we take for granted.

Hedgehog owners report that bites could mean a variety of things. Even things like bothering their sleep or washing them at a wrong time could result in a bite. When you look at the situation immediately followed by the bite, you’ll gain an understanding into the likes and dislikes of your hedgehog. Of course, if your hedgehog is constantly and randomly biting you, then that’s just plain aggressiveness. But seeing a clear pattern of the activities done before the bite could uncover some personality traits of your hedgie.

Biting to get something

One of the dangerous (or just very annoying) habits is biting to get something from the owner. When the dynamic unfolds in a certain way, the hedgehog may learn to communicate the need for something by biting the owner. In this case, too, this isn’t an aggressive behavior. It’s just a learned skill to communicate wants and needs. This is one of the behavioral aspects that could be taken care of by using a professional animal training expert. However, you can break the cycle early on. When you notice that your hedgehog bites you to get something, just ignore the request and wait for another communicative sign. Respond to less aggressive requests.

Hedgehogs love to explore their surroundings. Their mouth and teeth aren’t only for chewing food. It’s a useful tool to uncover the secrets of their environment. This holds especially true for hoglets. Baby hedgehogs love to bite new things. It’s quite similar to the phases that our babies undergo in their first months as well. This time is important for the babies to discover what’s edible and what’s not so tasty and proper to eat.

When hedgehogs bite during the exploration phase, there are no aggressive feelings backing up the nibbles. The bites happen out of sheer curiosity, not a wish to hurt someone or destroy something. You shouldn’t be controlling or stopping your hedgehog from biting things during this process. Only limit the oral exploration when there’s a clear sign it could become dangerous for the hedgie.

Different diseases and medical problems might cause pain that your hedgehog tries to communicate by biting a lot. When you don’t look into the issue and brush it off as plain aggressiveness, you might be making a big mistake. This is especially true if biting is very out of character for the particular hedgehog. Some hedgehogs rarely bite and start doing that when they really want to communicate a problem with their health.

Not all pain has something to do with medical emergencies. For example, the quilling phase might be quite painful for the hedgehog. But it’s definitely not a medical problem. Biting during the quilling process expresses your hedgie’s discomfort. Don’t get angry or worried about this. Quilling is something that passes with time. Just try to make your spiky family member as comfortable as possible.

There are many reasons why hedgehogs might feel a sudden onslaught of stress. When they get attached to their cage, starting to live in a new one might cause quite a lot of stressful feelings. The same goes for significant dietary changes. In these cases, the bite signifies feelings of frustration and discomfort that’s brought on by the changes.

Your hedgehog may suddenly bite because something in the surrounding environment startled her. For example, a noisy car driving past the house can upset your hedgehog. When you are close to her, she might bite as an instinctual response. Yet again, biting out of stress doesn’t express aggressive behavior. It’s just a clear-cut way to communicate something in a fast way. You need to look at a bigger picture and you’ll understand the particular cause of the bite.

Hedgehogs aren’t naturally inclined to have a lot of physical contacts. They are quite solitary creatures. For example, guinea pigs love social connections and even sleep together, cuddling with the other piggies. Hedgies don’t do that sort of bonding. That’s why having too much physical time could make them a little stressed, to say the least.

When your hedgehog feels they have been out of the cage for too long, they might start biting. Also, your hedgie might bite a bit more when you have just started the bonding process. In the latter case, it’s best to gradually increase the exposure to the physical connection over time. In other cases, the bonding time spent together could start having ties to something negative in the long run for your hedgehog.

Could the hedgehog bite without any reason?

While there are numerous situations where you can link the bite to a logical reason, it’s not always possible. Is this just plain aggressive behavior? Well, in the beginning, you always need to factor in whether there’s a chance for any health problems. If the hedgie is perfectly fine, then this really might just be part of their personality.

Even then, there are possible explanations for this excessive biting: hormones and territory. Some male hedgies are very hormonally driven, especially so, if they are close to some animals of the opposite sex. Neutering the male hedgie could significantly decrease the risk of getting bitten. When you plan on breeding and can’t do the neutering, then just know the following: some hormonal hedgehogs have stopped their biting after the breeding has been done.

And territory is another aspect. Some hedgehogs are much more territorial than others. They will feel complete ownership of the cage and the food inside. When you put your hand inside the cage, this territorial hedgehog will feel threatened because there’s an intruder in her domain. You are able to find out whether the aggressive behavior is territorially driven when the hedgehog stops biting outside her cage. In this case, it’s clear that the biting is a way to express the ownership of their territory. And who could blame a hedgehog for protecting their home?

How to deal with an aggressive hedgehog?

Bonding helps to calm the hedgehog in future situations. But many people are afraid to pick up their hedgehog when its hissing or trying to bite. Now, there’s a fine line between not respecting your hedgie’s personal boundaries and trying to create a healthy bonding relationship. When your hedgie is being really aggressive, then give them some time to calm down. But when you can see that they are clearly throwing a hissy fit, then just use some safe techniques to pick them up.

Always make sure to put your hand on the hedgehog’s underside. Their belly doesn’t have any sharp quills. At first, you can even scoop up part of the bedding that’s supporting your hedgehog’s weight. Later, when your prickly friend has calmed down a bit, you are able to lose the bedding. Another way is to use a towel. Put the towel on the hedgie’s back in order not to get pierced by the spines.

Pick your hedgehog up on a daily basis. It’s beneficial to do this on a certain time of the day. This will become a ritual that your hedgehog can expect using its internal clock. Of course, playtime is important, but do remember that too much playing and socializing may aggravate the situation. When your hedgehog gets tired and stressed, she could start biting or acting just plain aggressive even more than before.

The bottom line: are hedgehogs aggressive?

No, most of the hedgehogs are definitely not aggressive animals. They do show some behavioral traits that could be interpreted as aggressive. For example, biting often looks and feels aggressive, but there’s a multitude of possible underlying reasons. Anything from benign exploration and medical problems to stress overflow and communication could result in a bite. Always try to see the wider context surrounding the supposedly aggressive behavior. You might learn a lot about your hedgie’s likes and dislikes this way.